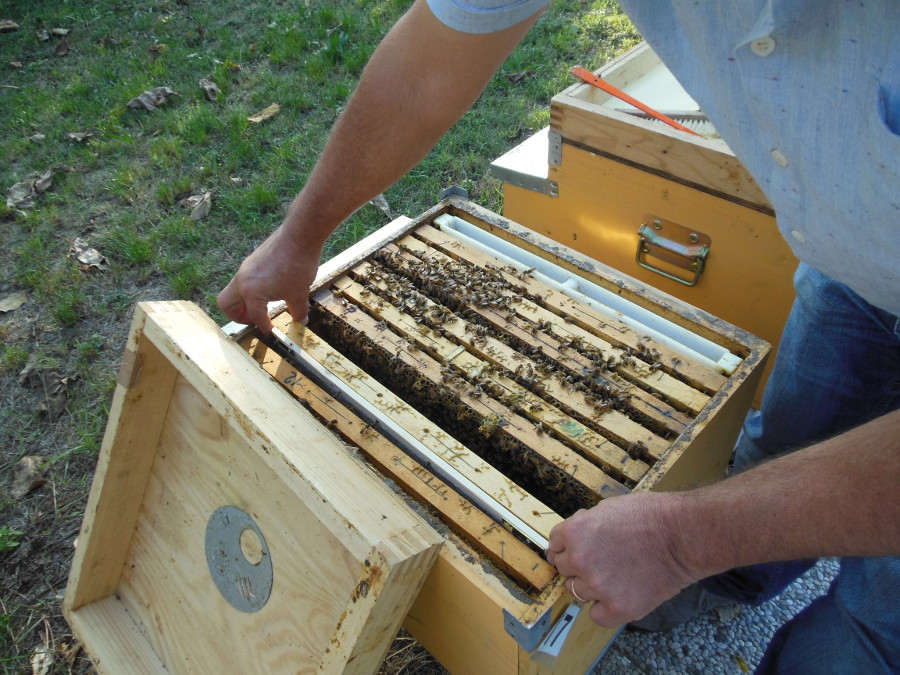 Darwinian beekeeping aims to improve honey bee health by applying some principles of their biology to management techniques. Until there, it’s pretty much what we – some colleagues and me – try to establish by applying the principles of animal welfare to honey bees. By how I phrase it, you may already imagine that it won’t stay this way. To be honest, I was somewhat disappointed and at moments really shocked while listening to Tom Seeley’s keynote at the 46th Apimondia at Montreal.

But let’s start from the beginning. Tom Seeley’s merit is that he’s one of only a few who studied honey bees under their natural conditions. He searched for wild nests in Arnot Forest in the USA and studied which type of cavity they prefer. In his book “Honeybee Democracy” he describes the process of how honey bees decide collectively. That’s incredibly interesting and captivating to read. I will surely read his last book as well, it’s on the list. Seeley has the ability to communicate science without losing accuracy, that’s something I truly admire.

The starting point for Darwinian beekeeping is Seeley’s work on the feral colonies in Arnot Forest. In his talk in Montreal, he pointed out some points about how they differ from managed honey bees:

Seeley now takes these points and turns them into recommendations for Darwinian beekeeping.

“In Darwinian beekeeping, the goal is to put managed colonies, insofar as possible, back into the honey bee’s original environment.”

Tom Seeley in his keynote at the 46th Apimondia in Montreal, 12 September 2019

In his talk, he made clear that this type of beekeeping isn’t for everyone because colonies kept this way aren’t as productive. The beekeeper, however, gets healthier colonies. Here come the recommendations he deduces from this:

I may have missed something, but this is the essence. Anyone who knows me, already knows where the red flags popped up. But again, let’s discuss this point by point. First of all, Darwinian beekeeping and honey bee welfare have in common that we want to get closer to honey bee biology with our management techniques. What I stumble upon, however, is this limitation that Darwinian beekeeping isn’t for everyone. Of course, it’s difficult to find anything that is. But by applying the principles of animal welfare, we would have a consensus of some minimal standards. Which, with time, could be extended and improved. In addition, by this limitation, we can’t solve the problem of severe colony losses which Seeley himself mentioned in the introduction of his talk.

There are many people who live from beekeeping. I absolutely agree with Seeley that we should focus more on honey bee health than only on productivity, but we need to take these professional beekeepers with us. Find solutions also for them, teach them respect for their animal, instead of saying “oh, this is the better way, but it’s not for you.”. The idea of keeping colonies in smaller hives with a deep hive body for the brood and a shallow honey super, however, is manageable. As well as spacing the colonies as widely as possible to avoid negative effects from crowding them. The colonies I look into regularly are covered by propolis inside, the bees do this themselves. This may be something related to the American beekeeping industry. I didn’t understand where these 10-20% drone comb came from (the numbers, I mean), and also what “best colonies” are, but ok. Also, at least here in Europe, the nest entrances usually are at the hive bottom.

My biggest criticism on Darwinian beekeeping

But, and you may be waiting for this, what made me nearly jump up from my chair was the recommendation not to treat against the varroa mite. No. Big NO. Let me explain. First of all, this may come from my European background: here we have an obligation to treat against Varroa destructor. Of course, also in Europe, not all beekeepers do so and I spent a huge portion of the past 25 years to explain them why they should.

With this issue, we also have to consider varroa biology. The most important trait in this context is the exponential growth of the varroa infestation if left untreated. You can see what this means in the graph above. Heavily infested colonies get weak and stronger colonies will rob them. This also is part of honey bee biology: they take the honey provisions of other colonies if they have the chance to. By this, unfortunately, they also take with them diseases and parasites like the varroa mite.

That is the reason for the regulation in Europe: the aim is to take care of the whole population of managed animals. Like honey bees. If one beekeeper treats because he cares about the winter survival of his colonies and his neighbour doesn’t, this neighbour is putting the treated colonies at risk. We are never alone in this world, even if we try to space colonies as wide apart as possible, there will be robbing and reinfestation. Again, at least in densely populated (also by beekeepers) Europe. This isn’t fair to those who rely on their colonies, who try to follow good practices.

The responsibility of the beekeeper

To be fair, Seeley also recommends to kill or treat heavily infested colonies to avoid what he calls “mite bombs”. But this isn’t enough. Something I tell beekeepers over and over again is “when you see the varroa mite, it’s too late!”. This is again because of the exponential increase of the infestation over time: when you see mites on the worker bees, the infestation is already extremely high. At that point, stronger colonies already robbed them.

With the varroa mite comes also a virus: the Deformed Wing Virus (DWV). By what we know today, it’s this virus which drives the worst consequences of the disease caused by varroa mites, the varroosis. And to make it worse, DWV, contrary to the varroa mite, doesn’t stay with honey bees. We have lots of evidence that it’s transmitted to bumblebees and also other insects when visiting flowers together. In another talk at Apimondia from A. Burnham (don’t know the first name, sorry…), we learned that bees can pick up millions of virus particles by visiting inoculated flowers. This issue is why I think we must include honey bees in the One Health concept.

This was the part that shocked me: Seeley is American, honey bees aren’t native there. On the other hand, the USA has a large diversity of native bees which could be at risk by Darwinian beekeeping. I find this quite short-sighted, to be honest. This isn’t Darwinian, it’s arbitrarily choosing some traits that are convenient for beekeepers. In the end, human interest wins, not natural selection. The interest in non-native honey bees, so who cares about the native species…

Don’t get me wrong, I don’t intend to turn back the clock and ban honey bees from the Americas. But, I prefer to stay with another keynote at Apimondia, given by Peter Rosenkranz. He stated that beekeepers are dealing with livestock and have to assume responsibility for their animals. This includes at minimum feeding the colonies when necessary and treating them against deadly diseases. Like varroosis is.

Beekeeping isn’t natural, even in areas where honey bees are native. Beekeepers manipulate the colonies, they have to. Speaking of honey bee health we have to include all beekeepers, those who just want a few jars of honey for themselves and those who live from their colonies. We achieve this by establishing good management practices, by developing standards for honey bee welfare and by including managed honey bees in the One Health concept. Darwinian beekeeping, in my modest opinion, isn’t the way to go.