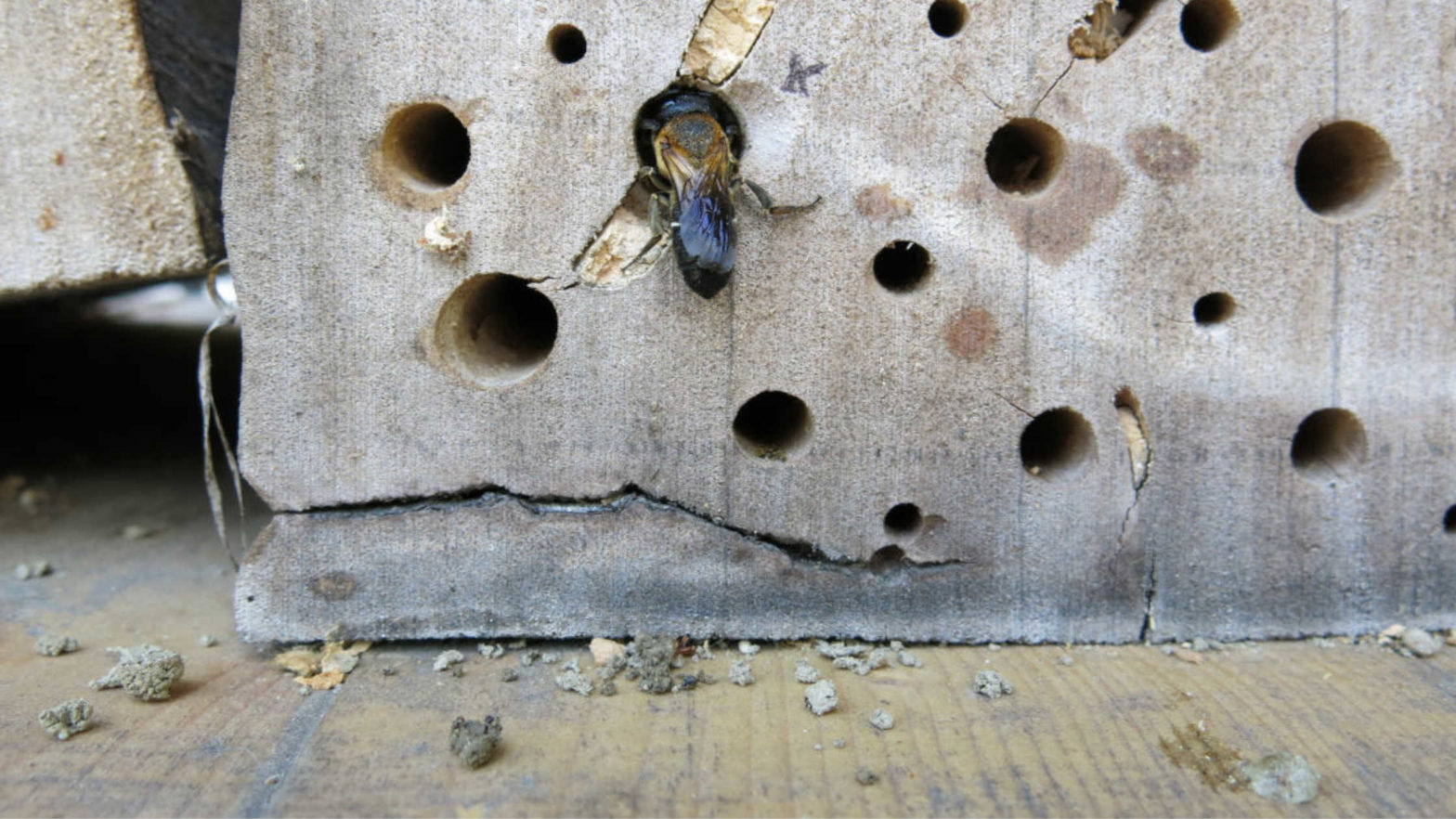 Bee hotels are very popular at the moment. Everybody sells them, often with the popular “save the bees!” attached to it. But are they really worth the hype? I’m not that convinced, as you may already imagine. Let’s start with the positive: insect hotels are a nice way for people, especially children, to learn about bees beyond honey bees. I’m very convinced of the saying “you only can save what you know”. Trap nests, as they’re also called, have the additional charm of being engaging: you can do them yourself. By doing so, you also learn about the cavity sizes different bee species prefer, about the species that may nest there, which materials to use etc. A perfect way of learning by doing.

I’ve always seen bee hotels as an educational tool. The entrance to the world of bees – which is a big thing, I definitely don’t want to belittle this. But there’s a caveat: you don’t “save the bees” with them. By the simple reason, that trap nests give a home only to a small fraction of bees. Most bee species nest in the soil. Bees nesting above ground and using cavities like those in insect hotels in Germany make only about 14% of all species. Let that sink in for a second.

My biggest criticism of the “Save the bees!” movement is – this shouldn’t be a surprise – the massive simplification. In general, it means honey bees. I won’t go into this issue, I discussed it extensively already. Some understood that it’s the non-managed bees that are most in danger. But here comes the next simplification: they step into the bee hotel trap, which isn’t very helpful, too. Especially, as you see them everywhere now. With the abundance of offers, come also those who just want to profit from the trend. Many of the insect hotels sold in garden markets, DIY stores or similar places are death traps: the borings, stems etc. have frayed edges. This can injure or kill the animals. Not exactly what people mean by “saving the bees”, isn’t it?

Simplification is harmless at best, but sometimes – like in this case – harmful. Like the Austrian philosopher Rober Pfaller said:

Everything is miserable as long as you don’t know how to do it. This applies to wiping off sticky liquids as well as to comforting desperate friends.

From the book “Wofür es sich zu leben lohnt: Elemente materialistischer Philosophie” (What it’s worth living for – elements of a materialistic philosophy), from Robert Pfaller, 2012. As far as I know only available in German.

Despite my amateurish translation, this is also true for “saving the bees”. Which I can’t write without quotation marks, I’m sorry. You have to know what you’re doing. And how to do it, depending on the species and habitat you want to work on. None of the over 20,000 bee species worldwide is exactly the same. They all have different life-histories and needs. The paper I discussed in my last post, states this very clearly: pollinator conservation fails because of the lack of specific actions.

Having ticked off the good and the bad, now let’s come to the ugly. A recent paper extensively discusses the effect of trap nests on the invasive Giant Resin Bee (Megachile sculpturalis). I’ve seen this species the first time in 2016, in the garden of the Apicultural Institute in Bologna. It’s an impressive bee, but I was less excited when I noticed that it was an invasive species. However, Geslin et al. wanted to investigate the belief that bee hotels serve bee conservation in general and specifically their use by M. sculpturalis.

They analysed 71 insect hotels in twelve parks in Marseille (on the Mediterranean coast of France). They then analysed how many species and how many individuals of each hatched in the following year. The results are worrisome: from the 889 individuals that hatched, 356 were the Giant Resin Bee. That’s 40%, the majority. The second-most abundant species was the Red Mason Bee (Osmia bicornis, 34%), followed by O. cornuta (16%), O. niveata (7%) and O. caerulescens (2%). All mason bees, all native, but not typical Mediterranean species, and except O. niveata none of them endangered. What already covers the aspect of “bee hotels as a conservation tool”. In addition, the invasive and the native species co-existed only in ten of the bee hotels. Geslin and his co-authors found that the more the invasive species was present, the less likely it was the native species could hatch.

Competition for nests and aggressive behaviour

There are several points in this paper that relate to the “saving the bees” issue from the beginning. The number of species is quite low and the invasive Giant Resin Bee is the dominant one. This is a problem: Invasive bees not only may transmit diseases but may also disrupt the pollinator-plant network. IPBES considers invasive species one of the reasons for pollinator decline. In particular, M. sculpturalis is also known for its aggressive behaviour towards other bees – both of the same and other species. They “clean out” other nests as well to use the cavity themselves.

Geslin and colleagues say that this behaviour can’t explain their findings: the native species they found, nest in smaller borings than the invasive one. On the other hand, another colleague studying these bees, Laura Bortolotti from the CREA-AA in Bologna, made different observations. They observed five dead carpenter bees (Xylocopa violacea) in a bee hotel where Giant Resin Bees were nesting as well. Carpenter bees are much larger than the mason bees in France; they nest in similar sized cavities like M. sculpturalis.

Do you see? The conditions were different, and, therefore, also the observations. In Marseille, the trap nests were “new”, they observed the bee population after the first year. In Bologna, when the invasive bee species appeared, there was already an established population of different bee species in the garden of the institute. The impact is different, depending on the circumstances.

Bee hotels are a tool

There would be much more to discuss considering bee hotels and their value to bee conservation. This is becoming an increasingly studied area, fortunately. Especially, like gardens and other urban spaces are getting into focus. My point is that insect hotels are a tool, not more and not less, in the toolbox for bee conservation. This shouldn’t discourage you. I’m not saying to dump everything you have in your garden. However, perhaps don’t aim to “save the bees”. Just do what you can. If this is planting a few flowers, having a bee hotel on your balcony – go for it.

Yet, be aware of the limitations. There’s no one-fits-all solution. Try things out, inform yourself, modify if necessary. In this context, I’m planning to offer consulting of bee-friendly gardens together with a gardener and architect friend. We’re splitting competences here (I don’t know everything after all…). If you have any questions in this area, let me know in the comments. I’m already doing this for agricultural context for a while now, but gardens – again! – are different. So we will have to think everything over and adjust it for these special circumstances. Your questions will help to make it a good service and to bring it to life.