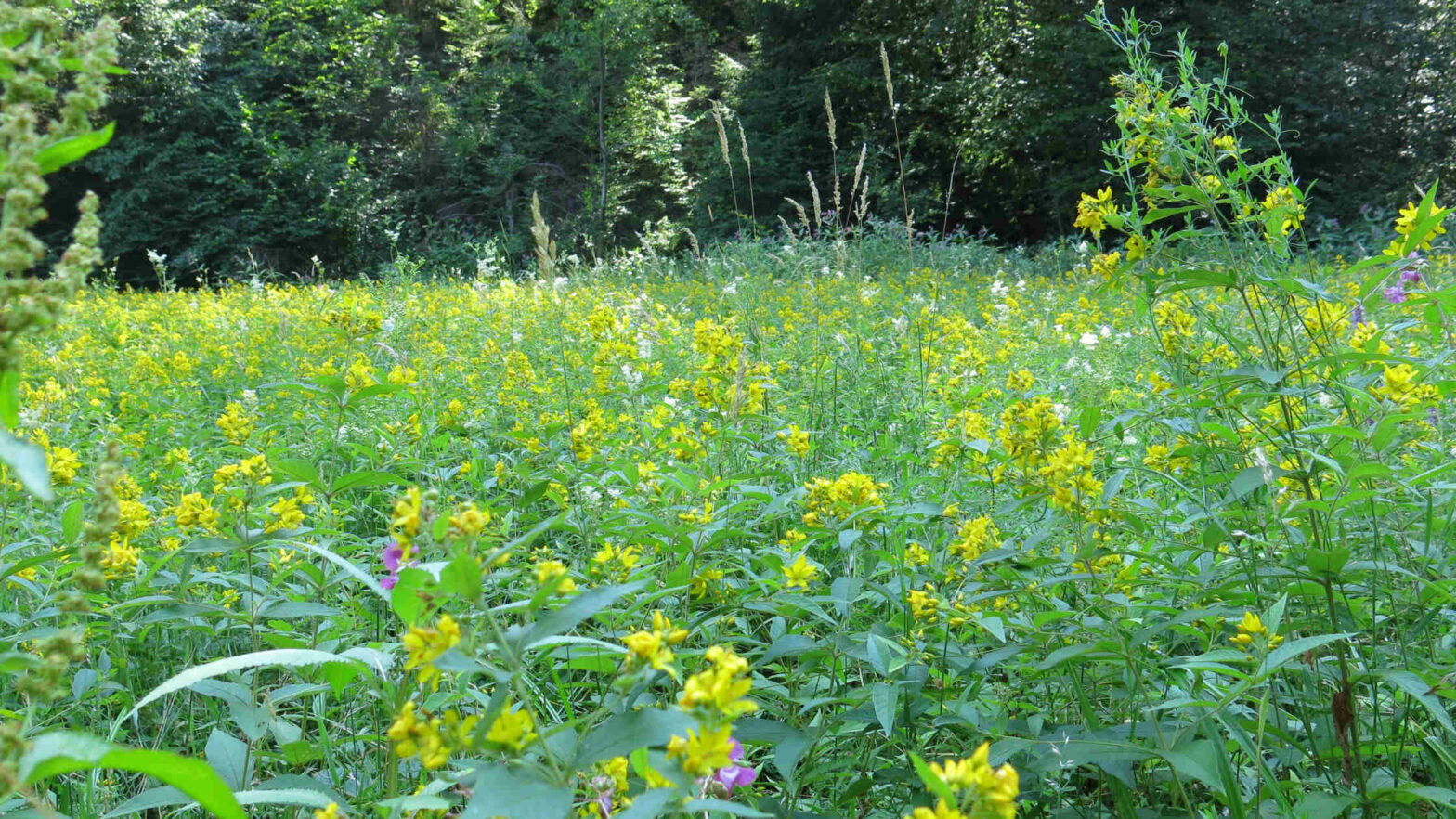 Agriculture and gardens are important elements in the discussions about bee habitat. Usually, they’re presented as a contrast: “More bee diversity in gardens than in farmland!” and similar headlines are quite common. This may be even true in some cases. There are studies showing this, and I’ve talked about simplified landscapes and their risks to biodiversity also on this blog. However, as often, it’s not as black and white as it sometimes appears. In addition, this type of confronting doesn’t really help to find a solution.

In Germany, this week a new “insect protection law” was adopted. It was hard to get there, there were some intense discussions between the two relevant ministries (environment and agriculture). And a lot of public attention, obviously. One of the comments I read today was “We don’t need better protection of insects, but radical protection!”. Well. You may know by now that I’m not a friend of radicalism. The world is complex, and radical solutions are often overly simplistic. However, there’s a grain of truth in this comment: we need to think big.

This new law in Germany or similar initiatives in other countries are the first steps. This means that there are still many steps that should follow. But a first step means a start, momentum. Doing things step by step also gives the opportunity to change while keeping the goal in sight. We simply don’t know how to “radically protect” insects. We already know enough to start, but not everything. New facts may show us other directions, depending on the conditions, like:

All these factors will influence what to do to protect insects. Regarding bees, we have to think about what bees need. As a rule of thumb, bees like it warm and dry. And they prefer open spaces, with small-scale structures. Farmland, in principle, is good bee habitat. It’s open, fields and grassland with hedges, fenceposts, and other structures offer food and nesting opportunities. A colleague once said that in Central Europe, the biodiversity we see is also because of agriculture. It opened the landscape which in this region would be covered mostly by forests. So agriculture isn’t only “bad”.

Sustainable agriculture, therefore, is the keyword. Also, because we need to eat, after all, don’t we? And we need bees and other pollinators for healthy nutrition. I’m starting to go in circles… The point is: Agriculture needs bees (and pollinators in general). We’ve not considered this relationship for too long, that’s the problem. The solution for this is finding a way to include bee habitat in formerly monotonous landscapes.

In this context, there’s another point I have in my mind for quite a while. A Twitter conversation with Carlos Herrera unblocked it. We talked about the role of sustainable agriculture in bee conservation. He remarked that we limit ourselves too much in discussing how to make agriculture more sustainable but forget the natural habitat over this. Which is key for bees – and biodiversity in general. It’s about habitat, habitat, habitat.

Meadows, for instance, are at risk in Germany. People would say: “We have grassland everywhere, it’s so beautiful and green. And look, all those dandelions, this beautiful nature!” Well, not exactly. Because despite all those flowers, the biodiversity in these areas is pretty low. There are plenty of bees, flies, and moths visiting the dandelions. At the same time, there are so many, which don’t like it. Because they’re specialized on other flowers. Or they don’t live in the area because their larvae need a specific food plant that doesn’t grow in a dandelion meadow. These pollinator species may need a nutrient-poor meadow with much more flower diversity than the nutrient-rich grassland with dandelions. And those nutrient-poor but species-rich meadows are at risk.

I kind of already hear the protest. Dandelions in spring seem to be the holy grail for pollinators. People are encouraged to leave them in their gardens, to see their beauty instead of considering them “weeds”. Great. This is a first step, like the insect protection law I talked about earlier. There are plenty of things you can do in your garden to create a bee habitat. Leaving dandelions and other wildflowers to grow is certainly a good thing. They’re food sources for insects and it changes the perspective of the gardener. Which, again, adds up on the positive side of this complex world we’re living in.

In our garden, we’re leaving about two-thirds of the meadow without mowing until late summer. We cut the rest down, for us to get without ticks to the veggie beds and fruit trees. This also is good for bees: they actually prefer shorter grass for their nests. I’m adding plants for bees and trying to create bee habitat wherever I can. However, the number of bee species that I might have in this garden is very limited. First, because I live in Westphalia, which isn’t a bee diversity hotspot like the Mediterranean. On the other hand, we’re surrounded by farmland. The largest problem I see for our garden is the nitrogen from the fields. Too much of it for the wet, perhaps marsh-like meadow we would have in the garden without this influence. But given the conditions, it’s not bad.

Gardens are managed areas. They’re meant for us humans, too, after all. I grow veggies here and manage a large area of the garden for our human needs. Which is ok. We’re trying to do our best, not to do any harm. Much of the wildlife we see in our garden, however, comes in because we have (more) natural habitat nearby. There are marshes near the channel in perhaps 300 m distance. About a kilometre away, there’s a naturally flowing river and a large, protected area. Many of the birds and insects I see in the garden wouldn’t be here without that natural habitat.

This brings us back to the point before: we need natural habitats for biodiversity. Not only because it’s the source of the wildlife we have in managed areas. But also because there are many species that just need conditions that don’t exist in farmland or gardens. Or any other human environment. A few years ago, I was exploring a trail called the “wild meadows path”. I like trails like this, because they’re marked well, and I can concentrate on the plants and bees I see without worrying about getting lost. Anyway, I was there because in a book about botanical trails I read that there were meadows full of hedge woundwort there. I was hoping to see wool carder bees.

Apparently, for the author of the book the wetter areas at the beginning of the trail weren’t as interesting. But my heart almost stopped when I saw meadows full of yellow loosestrife. I had never seen that before. I was so excited about it because there’s a bee species specialized in this plant: Macropis europea, the yellow loosestrife bee. Which I only knew from parks until then. But large areas full of this plant and good nesting opportunities along with them: that was naturally existing yellow loosestrife bee habitat! This can’t be replaced by smaller plantings in parks or gardens.

However, here we also come back to sustainable agriculture. In that year, we had a very hot and dry summer. Farmers were allowed to mow in natural areas to feed their animals if they didn’t make enough hay because of the drought. When I came back a week later to continue my observations, they had just cut down all the plants in full flower. I felt so discouraged, also because I don’t think that this made a good forage for the cattle or whatever other animals. Whenever I now come back to that place, I never see that bright yellow strip between a small river and the trail. There are still some plants but significantly reduced. And this particular bee doesn’t live on dandelion meadows.

You may think: “OK, that’s sad. But it’s one plant and one bee species only. There are so many others.” Unfortunately, it’s not that simple. Without the yellow loosestrife, the soil was exposed to heat. The meadows became dryer, which means that also other plants and animals living there didn’t find the right conditions anymore. In addition, every species counts. There are plenty of studies showing that the stability of an ecosystem depends on the biodiversity you find in it. It’s not the more the better, but you can’t just take some species out and expect that everything will stay the same.

This also applies to bees and bee habitats. Every bee species is equally important, together with hoverflies, moths, and all the other pollinators they make sure that plants get pollinated. Every species has its own life history, its own needs, and preferences. They can’t replace each other. Bee habitat exists in different forms and dimensions. If we really want to “save the bees”, we need to take care of them. Sustainable agriculture, bee-friendly gardens, and natural habitat -they’re all necessary for giving bees and other wildlife the necessary space to live in.

This post is part of my life-long quest against black and white thinking. Leave your questions and thoughts in the comments. If you want to dive deeper into bees, bee health and conservation, here are some ways to do so: