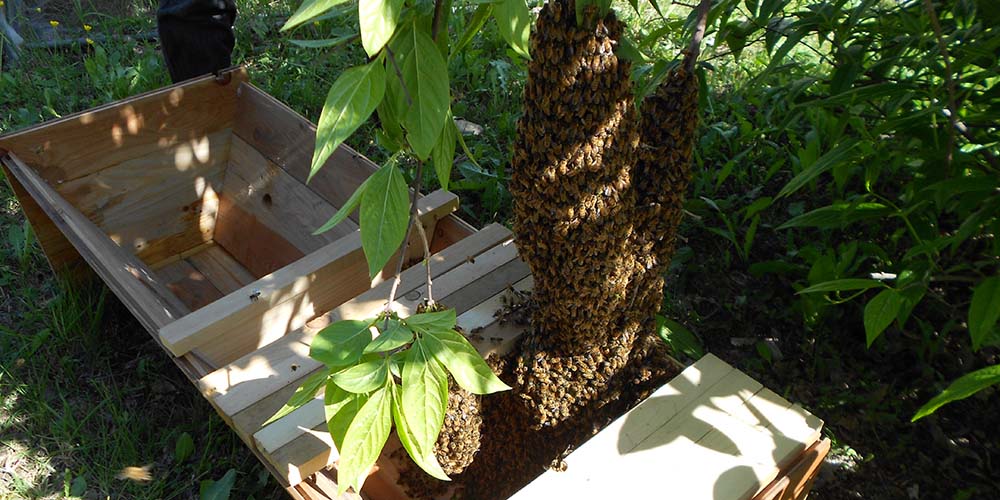 Animal welfare is often and intensely discussed for mammals or poultry. Bees on the other hand, only seldomly are considered in these discussions. This may be because it is hard to define what welfare could be for them. We see if a dog or a cow is not well, they are mammals as we are and they express pain, fear or stress in a similar way we do. With birds it is already more difficult, but there is increasing interest and concern about them. Even beekeepers who daily work with bees do not know what “welfare” could mean for bees. As I already referred in one of the first posts, honeybees often are not treated like animals but like honey producing machines.

The documentary “More than honey” shows the contrast between the traditional beekeeper in the Swiss Alps and the apicultural industry in the US. The latter is the expression of what I accuse by saying “honeybees are not honey machines”. Bee colonies are transported thousands of miles to pollinate almonds and then back to produce honey elsewhere. They are crowded in apiaries with hundreds of other colonies. Everything is oriented to productivity, not necessarily to the bees needs. They are not considered as animals, as living beings but as honey machines. Conditions in Europe usually are not that rough, though especially in Southern Europe there are also professional beekeepers. They also have to make a living out of this business, but the numbers of colonies generally are smaller which influences the rhythm positively. But anyway, also in Europe not everything in apiculture corresponds to the idyllic picture many have from beekeeping.

For the pathology course in the CREA-API in Bologna this week I was asked to give a lecture about the “Welfare of the superorganism”. An interesting but also challenging task. Together with some colleagues I have been talking about these things for years, but it is different if you are asked to teach. Then you should at least have understood a few things. The course was directed on the concept of superorganism: thinking of welfare was therefore a task on several levels. We have the whole colony and the single bees. Adults and brood. Sterile and reproductive animals (i.e. workers and drones/queens). Though honeybees are a very well studied insects species, we do not know much about the interactions between several factors that may influence the colony wellbeing. There should be enough resources for foraging, for nesting, not too much pests and parasites to pass the defences of the colony. We have knowledge about single points, but still not enough to really understand the system. In the case of honeybees as a managed species, we may also consider if there are conflicts of interest between the bees needs and ours.

Just considering the “natural” situation of honeybees and the managed environment in beekeeping, there are some hints that such a conflict of interest is existing:

I do not want to go back in history and force beekeepers to climb trees and become honeyhunters. But thinking more of honeybee welfare, more about what the bees need and not only on productivity may help both – honeybees and beekeepers.