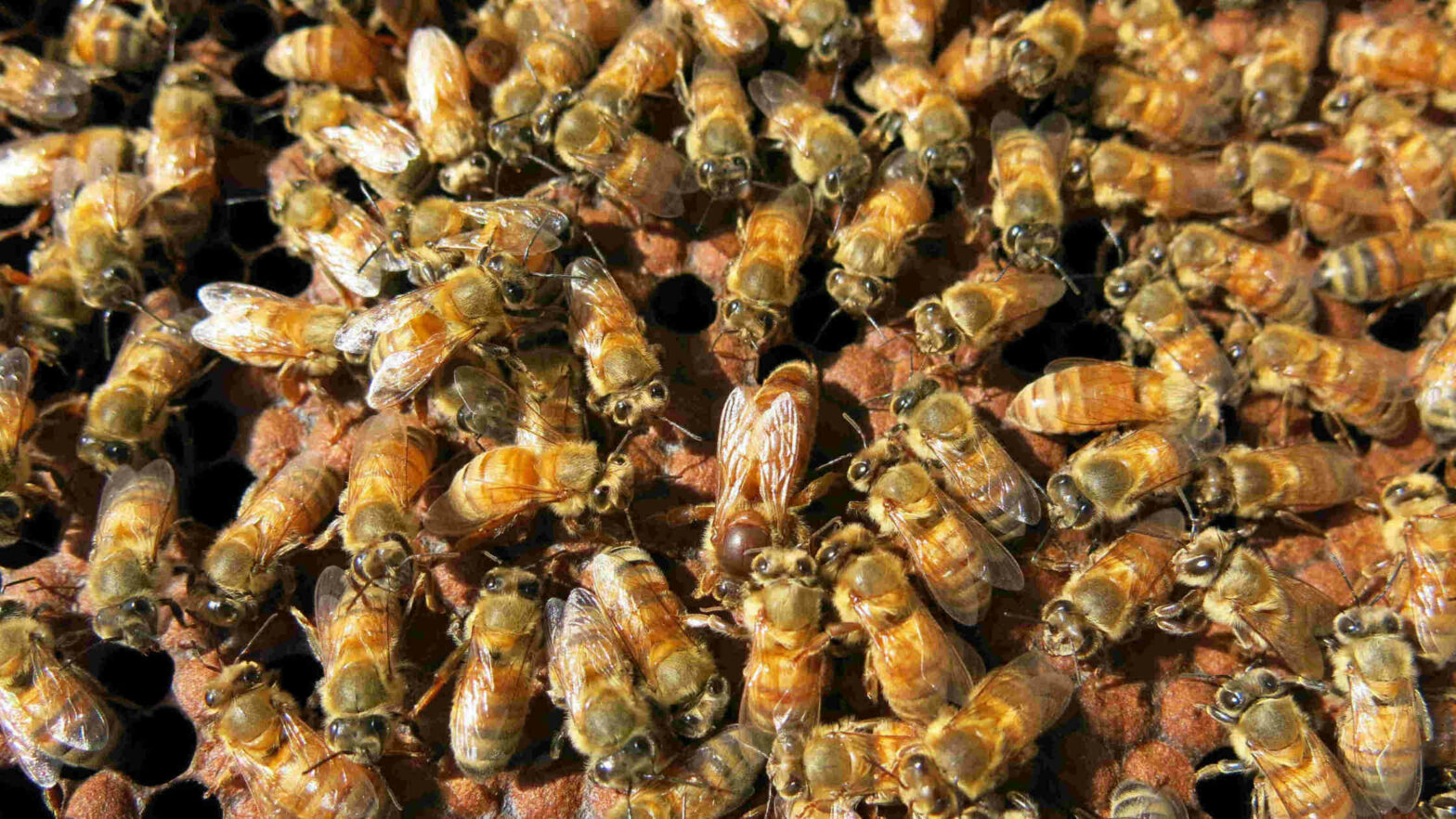 Social bees – and I don’t mean only honey bees by this – are more visible than solitary species. When there’s a bumblebee colony nearby or an apiary, you will automatically see more bumblebees of this species or honey bees flying around. It’s a numbers game. However, I always insist that the bee colonies are more than just a sum of their individuals. In the context of this series, bumblebees, honey bees and other social insects also have some characteristics that make them react differently to climate change. Two German scientists discuss these special characteristics in their latest paper.

There’s a crucial concept to realize for understanding the differences between social bees and their solitary relatives: the colony is the individual. In honey bees, ants or other highly social insects we even talk about a “superorganism”, in analogy to an individual organism as you and me are. Each individual worker bee in a honey bee colony, for instance, doesn’t survive for long by itself. It needs the colony. If single foragers die, this doesn’t affect the colony as a whole as long as it doesn’t exceed a certain threshold. Similar to if you burn yourself locally or if you over large areas. Take this comparison with a grain of salt. I’m trying to explain a complex concept in a few sentences. Again: the individual isn’t the single bee you see on a flower. It’s the colony.

But how does this relate to climate change? The reason why I torture you with this theoretical concept: Colonies of social insects are more or less sessile. Meaning they don’t move. The individual bees fly, are highly mobile. But the colony, the individual, stays at a single place. This means that the colony has to deal with the changes in the microclimate that may happen at this place. On the other hand, insect colonies also regulate the temperature in the nest. For honey bees, for instance, this means that they maintain around 35°C in the brood area, independently of the temperatures outside. If it gets too warm, they bring in water to cool the nest. Some workers begin to fan at the hive entrance to move the air. When it’s very hot, they form a real “bee beard”, something that sometimes scares new beekeepers.

Anyway, this is something solitary bee species aren’t able to do. They leave the nest alone, that’s it. If for any reasons the nest gets too hot, they can’t do anything against it. Obviously, they try to choose the nest size accordingly to protect the brood. But if a single female thinks that a window frame is a good place, the brood will most probably “cook” in the heat. The female is the individual here, and each egg she lays develops (or not) into an individual. On the other hand, social bees need more resources than solitary species. They’re active all year long, instead of only for some weeks. In addition, the colonies are quite numerous: They can easily grow to up to 35,000 adults and 60,000 brood cells. If a drought reduces the flowers drastically, because of being sessile, they can’t provide enough food for all of them.

Tropical honey bees, like the Eastern honey bees (Apis cerana), know how to deal with that: They abscond. Take all the stores they have and leave to higher altitudes. Where it’s cooler and they find more food. Their Western cousins (A. mellifera) may go into estivation (“oversummering”) mode. This happens in the southernmost regions of Europe, for instance. Their broodless period isn’t in winter, as I know it from Germany, but in summer. You see, they have behavioural adaptations to inconvenient conditions. However, there are limits. Physiological and environmental limits. Due to the warming climate, the conditions in higher altitudes for A. cerana may get similar to the valley. Which forces them to go even higher. We talked about this effect last week, for bumblebees.

The cooling behaviour of A. mellifera colonies may not be enough when the summers continue to break records even in formerly cooler regions like Germany. The water may not be enough. Seeing melted wax and honey coming out of the hive entrance, mixed with dead bees – that’s not an experience I want to have too often, to be honest. It’s the responsibility of the beekeeper to mitigate these extremes. By a warm, but shaded apiary, for instance. Well ventilated, so that heat doesn’t build up. My concern is more about the non-managed species. Especially tropical ones. The climate in the tropics is more stable than in temperate regions. Thus, species in temperate regions like Europe can deal better with a larger temperature range than those in the tropics. Where temperature doesn’t vary that much. A bit like the early spring solitary species compared to the later flying ones.

Extreme weather events and their impact on social bees

In regions with a hot climate, insects are in danger of overheating while foraging. The temperature regulation of social bees works only in the colony, not for single foragers. As a study on stingless bees found out, foraging trips become shorter, when temperatures go up. Interestingly, this happens with pollen foragers, but not for nectar foragers. Apparently, the maximum temperature they can bare goes up when they have access to liquid food. I don’t know if this is true also for other bees or insects in general. However, with increasing droughts, water access and nectar formation may go down, as we already discussed.

The consequences of global warming go beyond rising temperatures. There are, again, extreme weather events that social bees can’t mitigate by behaviour. For instance, flooding and heavy rains can impact ground-nesting species – both social and solitary. They do have some sort of humidity protection, but not against 100 L/m² in a short time period. In addition, these heavy rains often follow periods of drought and fall on soil that is completely dried out. With no capacity to take up the humidity. Droughts themselves may also harden the soil so much, that the bees – again, social and solitary alike – may have difficulties to burrow their nests. You see, it’s kind of a vicious cycle.

Climate change has an impact on social bees as on other insects. The effects may be a bit different, in managed species good practices can mitigate some of them. However, we have to halt climate change for not losing biodiversity. And biodiversity to maintain healthy ecosystems. Which, in the end, means ourselves.

This post is the last instalment of a series on the effects of climate change on bee health. I’m dedicating February 2021 to this topic and will show different aspects in four different posts. For deeper insight, I’m available for talks and seminars – online or in real-life, pandemic permitting. Contact me for more details.

Bumblebee ranges and climate change – some like it cool