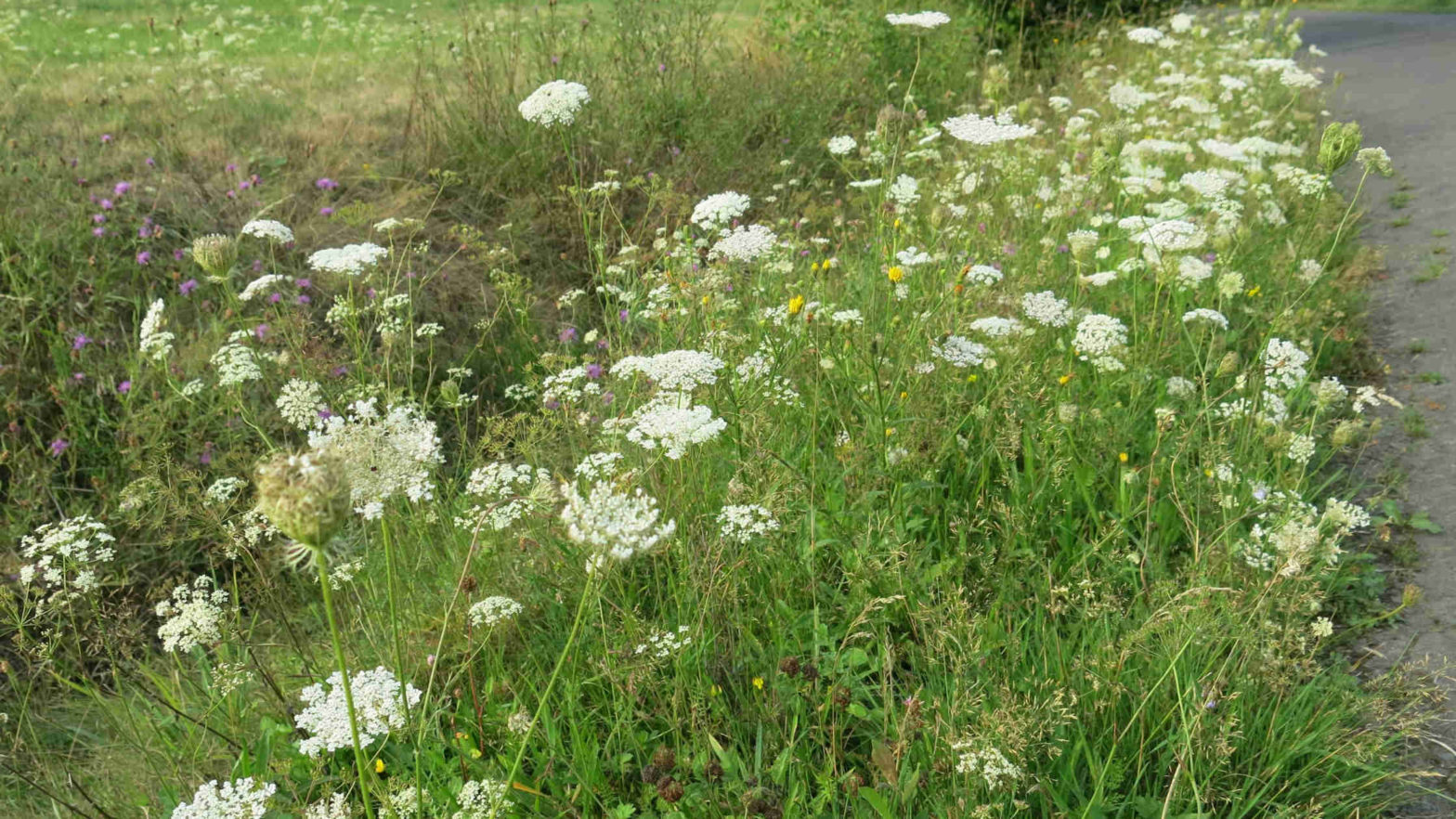 Road verges cover quite a bit of area. In Germany, where I live, it’s about 30,000 km². I’m not that sure how reliable the data are, but considering that this country seems to be covered in streets, it’s a good approximation, I guess. If you wonder how this relates to bees: well, road verges are quite a big buzz at the moment in bee conservation. Or pollinator conservation in general. As they cover such a great area, they could be a habitat for many species. In addition, managing these areas for pollinators could also add corridors between larger habitats. This would turn roads from a disrupting to a connecting element.

A month ago, the journal “Biological Conservation” published a review on how to enhance road verges for pollinator conservation. A very important read, as there are many aspects to consider for the different pollinators. So, let’s see how much these areas cover the bees’ needs.

Earlier this summer, I was able to travel again just in time to monitor a study in Italy. I travelled by car, so I had plenty of opportunities to look at road verges. Especially near Freiburg, where I spent the night on the way, I noticed that it looked especially species-rich along the country road. Mallow, wild sage, viper’s bugloss… to only name a few. But even on the middle strip of the highway, I entertained myself looking at wildflowers and bees during traffic jams. Mostly Reseda in this case, and I was a bit annoyed that I couldn’t get out of my car and see who the smaller insects were…

As you see, we may have one point covered: the foraging habitat. According to the mentioned review, road verges can be hotspots for flowers and pollinators. There are plenty of studies backing this up. Along my way back to the highway this summer, looked like an extended, species-rich meadow. In other areas, I’ve seen more scattered vegetation, with many flowers but also quite a bit of gravel and bare ground between them. And here it gets interesting for the second element of bees’ needs we discussed last week.

A Czech study showed that the areas next to roads can add valuable habitat also in regions dominated by agricultural activity. Interestingly, the study area wasn’t connected to grassland or other habitats. However, the authors found a rich bee and wasp fauna in the studied road verges, even with endangered species. The species they found were steppe specialists, therefore taking advantage of bare ground. This nesting habitat was what made the sustainable habitat.

Similar findings came from a previous study in the USA: the percentage of bare ground was one of the factors increasing species richness and abundance in the studied area. Both studies recorded mostly soil-nesting species. Which isn’t very surprising – not only are these most bee species but also the structure of the habitat both studies describe is steppe-like. The type of habitat predicts the bee species you may find in it. If there were shrubs in the background, I would also expect some stem-nesting species, deadwood would attract some cavity nesters etc.

Overall, nesting habitat isn’t considered as much as flowers. Which, as we now know, is the centre of bee activity. And, in addition, important to build up a sustainable population. In the current review, only four studies addressed nesting habitat. We definitely need more research in this area.

Do the benefits outweigh the risks?

Which brings me to another important point: the research about road verges as a pollinator habitat is quite scattered. In some areas, there are many studies with different pollinators. In others, there are only single studies or they deal mainly with certain groups but neglect others. For instance, insects get killed along the roads. Many take the decreasing amounts of insects on their windscreen as an indicator for their decrease. It’s happening less often, but still. Therefore, road verges could be a sort of ecological trap – first, we attract the pollinators and then we kill them.

In this context, Philipps et al., the authors of the review I took as a foundation for this post, make a quite interesting statement: We assume that the benefits of more pollinator habitat along the roads are larger than the risks. But in reality, we don’t know. “Inferred, but no studies”, they declare. Well, this is important. Because everything has two sides (at least). We need to consider the risks, the disadvantages as well. This isn’t to discourage anybody. But we need to do things right, and not for the activity’s sake. And knowing the risks, we also can develop measures to minimize them.

It’s well-established that cars, trucks, and other vehicles kill pollinators. I have a quite impressive experience with that myself: Years ago, I was driving to a study in Austria when I saw thousands of painted lady butterflies migrating over the highway. Unfortunately, flying quite low. So, despite reducing my speed to the allowed minimum, within minutes my windshield and the whole car were full of dead butterflies. It was horrible, definitely not an experience I want to repeat. However, it seems that enhancing the habitat along roads has more positive than negative points. At least for butterflies and moths. Other pollinators aren’t studied in this aspect.

Another element of the picture: roads can be barriers for the dispersal of pollinators. For bees, again, this isn’t very well-studied. It seems that they do crossroads, but that at least some of them prefer not to. In a Swedish study, only 10% of Andrena hattorfiana (the large scabious-mining bee) crossed the road. The authors call it sedentary, as it doesn’t like to move far from the nest. This species is oligolectic, specialized on scabious as its name suggests. It’s an endangered species. Therefore, if we want to help species like this, we also have to make sure that there is suitable nesting habitat very nearby. They won’t cross the road if the flowers are on one side and the nesting habitat on the other.

Philipps et al. dedicate a large part of their review to recommend how to manage road verges. This is maybe the most valuable part of the paper. The transition between research and practice isn’t trivial at all. In addition, it’s especially important to do the right things, not just “anything”. The main recommendations of this review are:

The latter is relevant especially for moths and other nocturnal insects. Which brings me to another point: it’s important to know what we want to achieve. High-quality habitat for butterflies may not be high-quality for an endangered bee species like the large scabious mining bee. Considering the conditions at the sites, the surroundings, defining the issues at every single location is crucial. This is what makes it complex. We have to careful of one-fits-all solutions.

I think road verges are a valuable corridor between habitats. They’re one tool in the conservation toolbox. The difficult step is to transfer the scientific findings into practice. In a way that is adapted to the local conditions. If you need advice on how to do this, I’m more than happy to help.