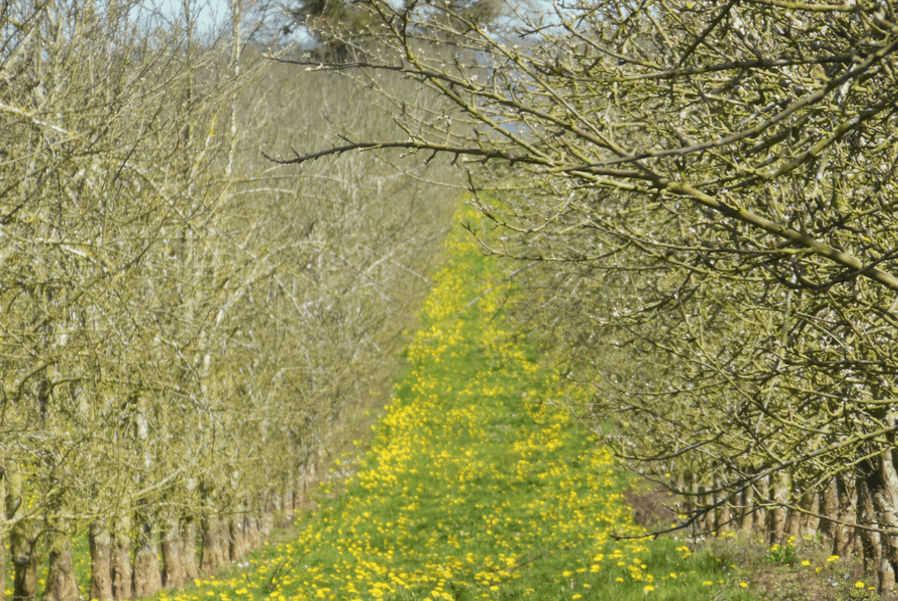 I don’t know about you, but I’m longing for spring. It’s the same every year: about February, I begin to feel tired of the winter. Now it’s March, but it’s still cold and grey. So I thought it would be nice to warm up with a series on insect pollination. To mentally prepare for better times. I intentionally say “insect” and not “bee pollination”. This month, we’re looking somewhat beyond bees, just to broaden the mind a bit.

In fact, the division is not between bees and other insects as pollinators, but between wind pollinated and animal pollinated plants. Some plants just leave the wind transport their pollen (hazel, grasses and many more). Most of the flowering plants (so-called angiosperms) however, need animals for pollination. An estimate from 2011 tells us that 87.5% of the angiosperms need animals for their reproduction. Not only insects, also vertebrates like birds and bats do the job. But I’m already moving outside my “comfort zone” talking about other insects as pollinators, I won’t go much into that part.

Most of the time we talk about pollination relating to our food. Though we get our calorie intake mostly from wind pollinated plants (cereals), the variety of our diet relies on insect pollination. However, if you realize that number above – 87.5%! – it’s clear that we’re talking about a much bigger topic. Plants are the basis of the food chain. By this, they support a huge part of the nutrient and energy cycles in living systems. A colleague once said that pollination after photosynthesis is the most important function for maintaining life on earth. Or as this review puts it:

… species diversity of pollinators is crucial to how most plants reproduce and therefore how many terrestrial ecosystems function in the long term.

Pollination systems – plants can be picky, too

If it’s not clear by now: pollinators help plants to reproduce. It’s an “sex for food” exchange. This was first discovered by Christian Konrad Sprengel end of the 18th century and it wasn’t received very well in his times. So when dandelions cover the grass with yellow flowers, apple trees seem white and pink clouds and roses smell seductively they don’t do it for us. They do it to attract insects who take up some pollen and bring it to another flower of the same species. Bees do this very well, but also other insects like flies, moths and butterflies are pollinators.

Plants want to attract insects, we got this. But they can have different strategies to do so: some species just take every pollinator that flies by – they’re generalists. Others try to attract specific pollinator groups. There are bee flowers, butterfly flowers, bird flowers, fly flowers… they rely more or less exclusively on these pollinator groups. There are some hints to recognize the favourite pollinator of a flower, like its shape, colour and smell. It’s not that rigid though as the classification suggests, it’s a continuum. There are some plant species that rely on a specific pollinator (e.g. figs and fig wasps) and others that welcome everyone. In between there are all kind of variations you may imagine. Most plants are in this variation range and more generalists than specialised.

A month ago, I wrote about pollinator diversity and that bees prefer Mediterranean climate and are less diverse in the tropics. The flowers there rely more on other pollinator groups. Looking at the supplement material of Ollerton’s review, I was quite curious to see the geographical distribution of different pollination systems. As expected, insect pollination is dominant in most areas. Bird and bat pollination are more frequent in the tropics. There was something surprising to me, though. You may see it, when you look at this graph (no exam, I’ll explain, but take a look first).

Got it? Do you see that yellow column for the bees? That’s the tropics. So, isn’t it true what I just said and have written already so many times? No, I still dare to repeat that statement – tropics aren’t bee areas. There are several gaps in this graph, which you can’t see if you don’t have the data. First of all, the number of studies in the different climate zones isn’t the same. Most studies were done in the temperate zone (which would include the Mediterranean), 14 studies out of 32. Only seven were done in the tropics, eight in the subtropics and three in arctic areas. In addition, not all studies considered all pollination systems. From the three arctic studies, only one dealt with wind pollination. Two publications from the tropics don’t deal with moth pollination. So the graph isn’t correct because it’s imbalanced.

The graph is the result of playing around with data, like I often do to understand them. However, looking at the data shows how much work there is still to do on pollination. Understanding pollination systems, if we come back to the statements of the beginning of this post, is crucial for understanding the living world around us. And it will give us valuable information for conservation. I won’t repeat my eternal mantra of the importance of diversity this time, I think you got the message by now.