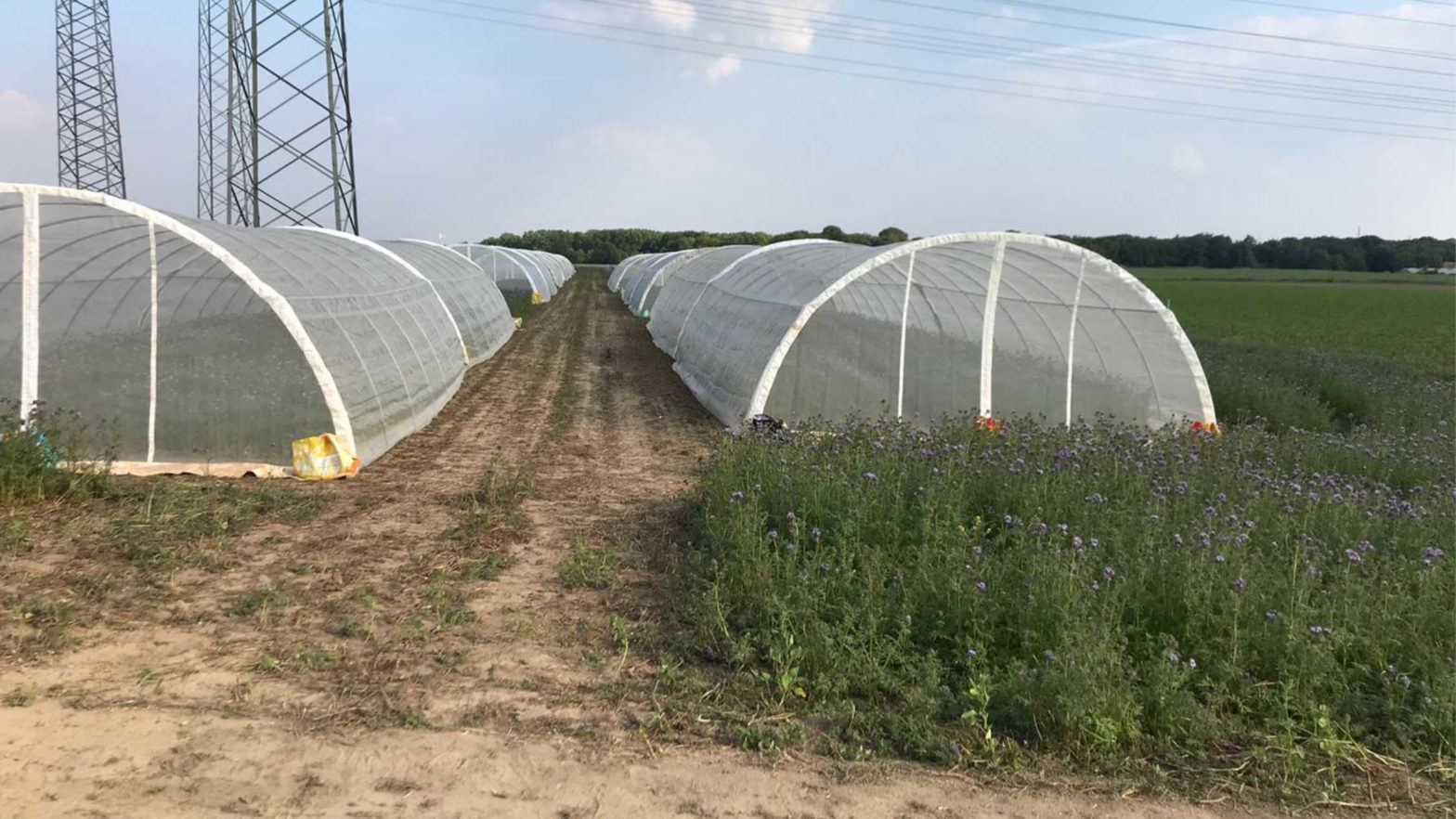 The impact of climate change on pollinators is complex. In the examples I gave last week, we saw how a divergence between the flowering period of a plant and the activity period of a bee species can affect the latter. Such phenological mismatches happen when plants and pollinators react differently to rising temperatures. Phenology, if you don’t remember, is the science of periodically repeating events in the life-history of plants and animals. Like bird migration or flowering of plants. Or the activity periods of pollinators. Well, in the study I discussed last week, the researchers stated that mismatches can severely affect solitary bees. They produce less offspring and die if the period without food is too long.

However, this study was experimental. Which means that that it’s “artificial” to some extent. For instance, in an experimental set-up, all bees will be in the flight cage at once. Yet, under natural conditions bees hatch over a longer period of time. Not all at once. Meaning that for some individuals the mismatch will be larger than for others. Males and females may react differently, too. Does this mean that we can forget about climate change and bees? No. The study showed the impact on individuals, these results are valid. But we cannot transfer them to the population level. The statement “Phenological mismatches affect the reproduction of solitary bees” is correct. But saying “All bees will get extinct because they don’t have anything to eat!” is a clear exaggeration. Because it depends.

The population level of the mismatches

As tragic as it is when an animal dies because of starvation: if this leads to the extinction of a species in a given area depends on many factors. Jessica Forrest wrote a beautiful paper on this issue. Very clear and thoughtful. As she lays out: we don’t know much about the factors that limit populations for many species. On the plant side, early flowers seem to be most affected. For instance, Corydalis ambigua, depends on bumblebee queens for pollination. A mismatch means that the plants have a lower seed set and this will have an impact on their population. On the bees’ side, things are less clear. Apparently, the effect on them is larger than on flies or butterflies. After all, they depend on flowers also in their larval stage. Other pollinators use different resources during their development.

In addition, the phenological mismatch isn’t the only potential threat resulting from global warming. Forrest discusses this in her paper, making clear that we need to address things like dry winters and heat stress, too. For instance, in winters without snow, plants can dry out and they don’t have the protective layer against the cold. Dry winters apparently lead to less flowers in the following years. This will affect bees and other insects. So, another impact of climate change on pollinators.
I’ve been dealing with one more factor in the past years. Drought. Here in central Europe, winters should bring a lot of snow and fill up the water reservoirs for the vegetative period. The temperatures in spring are still moderate, and the heat in summer isn’t too bad. Not in the past years, though.

Another impact of climate change on pollinators

Consciously I’ve noticed this around 2007 for the first time. The proverbially instable month of April was very dry and warm. A little summer, temperatures going up to unusual heights. This “exception” became “normal” later on. With temperatures up to 42°C in summer nothing is normal anymore. Water reservoirs are going down and farmers complain of lower harvest. In contrast to Mediterranean countries, irrigation of the fields isn’t common here.

In the past few years, this phenomenon affected my work: in many agricultural studies, Phacelia is used as a surrogate crop. Meaning that it’s used as a model for other crops. Especially for studies in tunnels. In addition, you can sow it several times a year and do many studies in a row. But: it needs a lot of water and isn’t very heat resistant. From some bad experience in Mediterranean countries with this crop, I’m not that convinced it should be the “go-to” crop for these areas. However, last year, things became tricky also in Germany.

During a study I monitored, the study director told me that they had problems with the Phacelia plants. The spring was very dry and the plants remained low. Despite the flowering was good, we were concerned that due to the drought the plants wouldn’t produce much nectar. This would cause an impact of climate change on pollinators – honey bees in this case. If they don’t find enough nectar, they would starve. In consequence, there could be a blurring of the effects of starving with those we were assessing and the study wouldn’t be valid. There was a possibility to water the field, fortunately. So the study went on without major problems. However, drought is a factor to consider also in the risk assessment studies in agriculture. Even in fertile areas like the Rhine valley in Germany.

Drought – what does it mean for wild pollinators?

Of course, the drought affects not only agriculture but also natural habitats. With consequences for both plants and pollinators. Philipps and colleagues studied the effects of drought on calcareous grassland. They looked at three plant species in detail, but also at the plant communities. They found just what we were afraid of in the study above: meadow vetchling and common self-heal produced less nectar. There were fewer flowers producing it, as this needs water (the main component of nectar, after all). Common sainfoin produced fewer flowers, which also means a decrease in resources for pollinators.

At a community level (so all the plants in the studied plots), drought reduced the overall number of flowers. At some places, also the species richness of flowers decreased. All this affects pollinators. Also this study was experimental, so the effects may be somewhat different under “natural” conditions. However, the simple result less water equals less nectar is plausible. Which means less energy providing nectar for pollinators. And who knows about the effects on pollen? There’s another study showing that increasing CO2 decreases the protein content in goldenrod pollen. If this is true also for other plant species, this means that bees and other pollinators are getting junk food where they found high-quality food in the past. Looks like healthy food but isn’t.

The climate crisis and the biodiversity crisis are linked. Everything I told you today hopefully made you understand that these are very large issues. The impact of climate change on pollinators is complex and it won’t be solved by planting trees. There are a lot of concepts out there, like this “roadmap for insect recovery”, that was published shortly before the pandemic started. It may not have got the attention it deserves.

Which is an issue of its own. Because addressing biodiversity loss is not only a question of food security. The current pandemic is showing us how important biodiversity is for our health. It’s also because of the massive destruction of habitats that this damn virus had the possibility to jump over on us. It’s also because of drought and other extreme weather events that millions of people leave their homes and seek their luck in the so-called “first world” (hate that term as much as “third world”, but that’s another story). All these issues aren’t black and white, aren’t solved with a one-fits all solution.

You may get by now that over-simplification isn’t only a pet peeve of mine. It’s a root cause for not solving the world’s most urgent problems. Step by step, learning and adapting on the way. I’m here to do my part and start with the bees.

This post is the part of a series on the effects of climate change on bee health. I’m dedicating February 2021 to this topic and will show different aspects in four different posts. For deeper insight, I’m available for talks and seminars – online or in real-life, pandemic permitting. Contact me for more details.