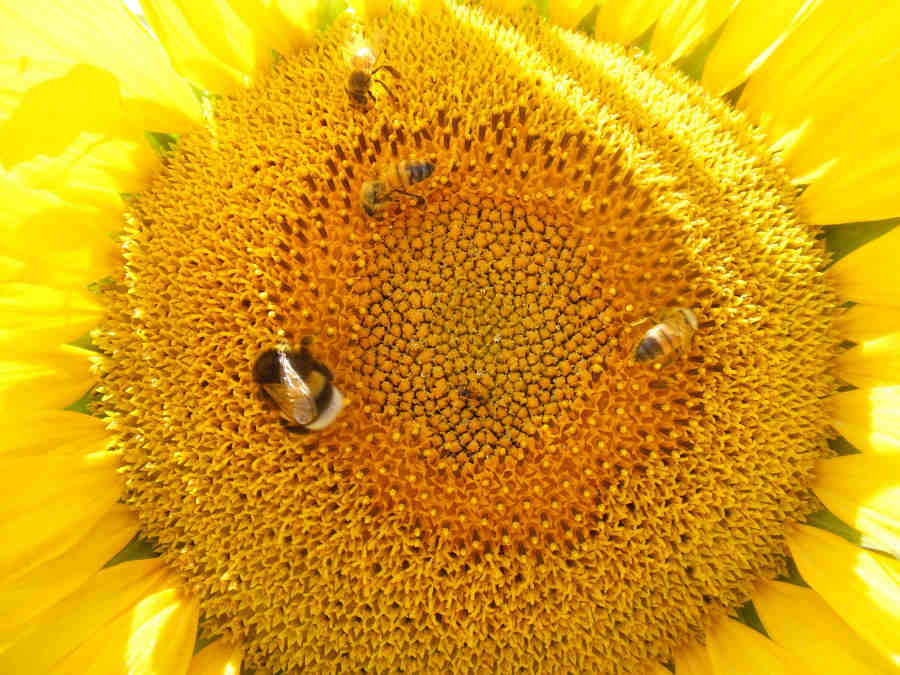 Bee nutrition and parasites are getting quite some attention these days. Which I’m very happy about, as I prefer to see bee health in a broader context than only the absence of diseases. I discussed this already in some posts like recently the one on honey bee welfare or the One Health Concept and the risks from managed bees for non-managed pollinators. However, I didn’t go in-depth with the role nutrition plays in bee health.

Bees rely on flowers for nutrients. In addition, pollen and nectar contain also so-called secondary metabolites. These substances are part of the plant’s defence against herbivores and often poisonous. On the other hand, they’re also “medicine” for animals and protect them against parasites. This is true also for bees: there are some studies for bumblebees and honey bees, showing that secondary metabolites help the bees to cope with gut parasites.

The relationship between bee nutrition and parasites is complex and there’s still a lot of need for research. A recent study on mason bees even hypothesized that some species may specialize on certain pollen sources, even if the nutritious value is scarce because it helps to protect them against brood parasites. This was a very exciting paper: it studied a mason bee species specialized on pollen from the sunflower family. They found significantly less parasitic wasps in nests of this species than in nests of more generalist bee species.

A new twist on the relationship between bee nutrition and parasites

Now there’s some new research that adds a new perspective: only last week a new study was published by Hauke Koch and his co-authors. They studied the effect of honey extracts from different plants on the bumblebee gut parasite Crithidia bombi. They screened 17 different plants and found that extracts from ling heather (Calluna vulgaris) and Viper’s bugloss (Echium vulgare) both completely inhibited the parasite. Honey from the strawberry tree and linden also significantly reduced the growth of C. bombi. None of the other plants they screened showed any effect on the parasite.

These findings are already very interesting, as it confirms that for a “healthy diet” bees need different flowers. Some may be good sources for nutrients, other plants have the added value of protecting against parasites.

However, Koch and his coworkers didn’t stop there. They looked deeper in what made the ling heather so efficient against C. bombi. And found that a substance called callulene inhibits the infection of the parasite by removing the flagellum. This structure apparently is crucial for establishing the infection with this parasite. Interestingly, however, the substance helped to prevent the infection but didn’t cure it. This is an important distinction: heather helps bumblebees to stay healthy, but it’s not a treatment against parasites.

Back to the nutritional aspect: the authors are concerned that heathlands are declining and bees may lose an important medicinal plant and nectar source. However, this paper impressively shows the importance of nutrition for bee health. Calluna vulgaris doesn’t occur everywhere, but there are also other plants with similar effects. In this study, also viper’s bugloss, strawberry tree and linden helped to reduce the establishment of the infection. They were less potent than heather, but who knows about their effect on other parasites and diseases?

We already have several indications on how bee nutrition influences bee health: in a talk on the Apimondia conference in September, Amy Toth showed that good quality and diverse nutrition helps honey bees to overcome viral infections. She stated that nutrition is fundamental to bee health. Although she was talking about honey bees, I dare say that this is the case also for all other bee species. And this recent publication from Koch et al. confirms this assumption.

However, I think that we shouldn’t focus on single plants, but on diversity. Heather, as said before, doesn’t grow everywhere and C. bombi isn’t the only bee parasite. We should take this work and future research on this topic as an argument for protecting bee habitat, with all its floral diversity. In the UK it may be heather, in Sicily, Australia or in Northern Chile other plants may protect bees against parasites. It’s not only heathland or insect-friendly gardens (or any measure claiming to “save the bees”) but habitat. We shouldn’t lose sight of the big picture while studying the details.