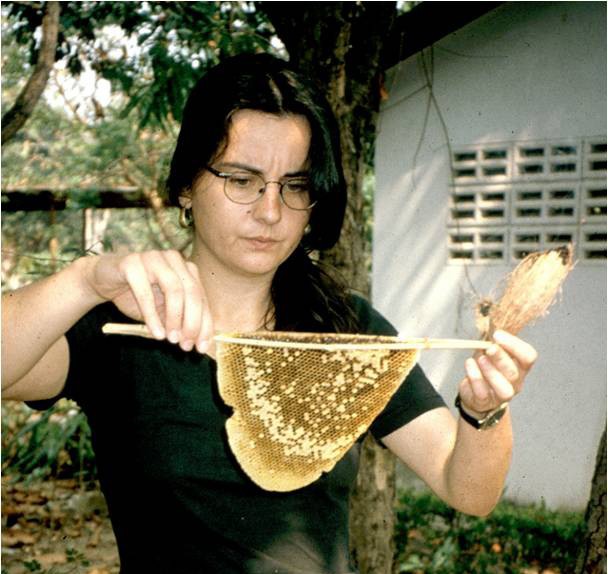 Reading about a healthy and persistent wild bee population in the USA resisting also varroa infestation made me think of the original host of the varroa mite, the Eastern honeybee Apis cerana. For my PhD, I studied the fertility regulation of Varroa destructor. As the mites do not reproduce in the worker brood of their original host, I went to Thailand twice to study this equilibrated relationship.

I went to the Beekeeping Center No. 1 in Chiang Mai, Northern Thailand. The staff of the Beekeeping Center was very kind and helped me to get used to the work with this bee species, find colonies and offered me a house on the campus and a lab. The experience was of course exciting, also because working with A. cerana does not mean just to do the same things you are used to at home. The bees look quite similar and they also nest in cavities building several combs. They dance, the nest structure is similar to Western honeybees but – to say it in the words of Thai people – they are “samesame but different”. You cannot use smoke as we do it usually with European honeybees, with a smoker you would just make them escape. You can see the alternative on the photo: with glimming coconut fibers you can produce a slight smoke to make them leave the place you want to put your hands on or look at. They are very gentle (normally) as long as you move really slow.

But the main reason why I remembered them after reading Seeley’s paper last week was the absconding behaviour. Absconding first looks like swarming, but in this case the colony does not divide but leave completely. This is the reason why I am not amused on that photo: this was my last A. cerana colony I had for my experiments and it left before I could finish anything. In that times (1998) Youtube had not even been thought, but fortunately also later PhD students made similar experiences: in this video you can see how it looks like.

These bees do not abscond to irritate students, it is also an adaptation. Traditional beekeepers in Thailand know that their bees leave when the season gets dry. When there are not enough resources to forage on, they leave to the hills. But these beekeepers know also that the bees will come back as soon as the rainy season starts and there are again more flowers in the valley. They leave also if something disturbes them: high predator pressure, many parasites or diseases – and naughty students that open the colonies several times a day. When they do this, they leave behind also brood (you can see that on the photo) that may be diseased and build up a new and healthy colony at another place.

After I had lost this last colony, together with the director of the Beekeeping Center, Mr. Sirisak, we searched for new colonies. Nowadays also in Thailand beekeeping works mainly with Western honeybees, so we had to address old men that still worked in the traditional way. But they did not want to give them to us. Not because they would end in the hands of a falang (a stranger, European), but because we offered them Western honey bees instead. Mr. Sirisak told them that these foreign bees produce more honey, that they are easier to manage: there was no way to convince them. They told us that their native bees and the honey they produced were healthier. That it was better if bees were wild and lived as they wanted to. In that times, I did not even recognize how wise these old men were.