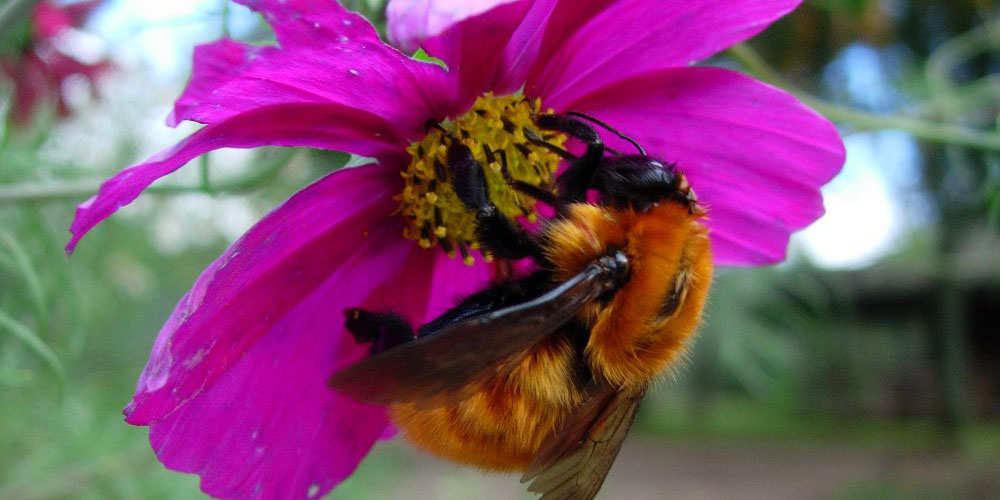 My “bee career” began with bumblebees. It was in a course of evolutionary ecology at the university; together with another student I observed different bumblebee species on different flowers in the garden of the faculty. We noticed that some bumblebee species fly on open, more disc-shaped flowers, while other species preferred flowers with long corollas and complex morphology. This observation made us conclude (with some help of the assistant professor), that the first species are short-tongued and the latter long-tongued. These observations and deductions made us understand the concept of ecological niches in a much more impressive way than any book could have done.

A year later, I went to Chile and stayed for another year at the University of Concepción in a master program on entomology. My intentions were not related to bees, but I was already hooked by the former experience with bumblebees. Therefore, I immediately noticed these really enormous native bumblebees, Bombus dahlbomii, the only native one in Chile .

Beyond this, one could say that B. dahlbomii gave my life a turn. I was standing with a friend in front of the faculty building, when suddenly something big flew against my head – it was a B. dahlbomii queen. Apparently my head was too hard for her, she fell on the floor, dazed. This poor queen had the bad luck to meet a zoology student’s head, so she found herself in a killing glass to be observed more thoroughly later. Which changed everything: on this queen there were mites. And on these mites there were even more mites. I already knew about phoresy, but hyperphoresy?

The acarologist in the faculty, María Casanueva, helped me with the determination: the phoretic one corresponded to adults of Hypoaspis sp. (Laelapidae), probably a new species. With the hyperphoretic mites we arrived only to the family level – some immature Acaridae. We even wrote a scientific note in the university’s zoology journal.

This single unlucky bumblebee queen had opened the window to a whole bunch of questions: from the determination and description of the two mite species, over the life-history of these to the phylogenetic relationships of Holarctic and Neotropical bumblebee species and their associated mites. I did not go further into it – I left Chile and its bumblebees after a year – and do not know if anybody else did.

In that times, a European species, B. ruderatus, had already been introduced. They were much less frequent than the native bumblebees and nothing announced the dramatic outcome 20 years later. If B. dahlbomii gets extinct, it is not only a single species that gets lost. It is also all their associated organisms like these two mite species, perhaps even the chance to understand something more of this amazing world we live in. I already commented on other aspects of the introduction of foreign species . But the case of a big, hairy bumblebee, the case of Bombus dahlbomii for me is much more than this: it is personal. I am just terribly sad.