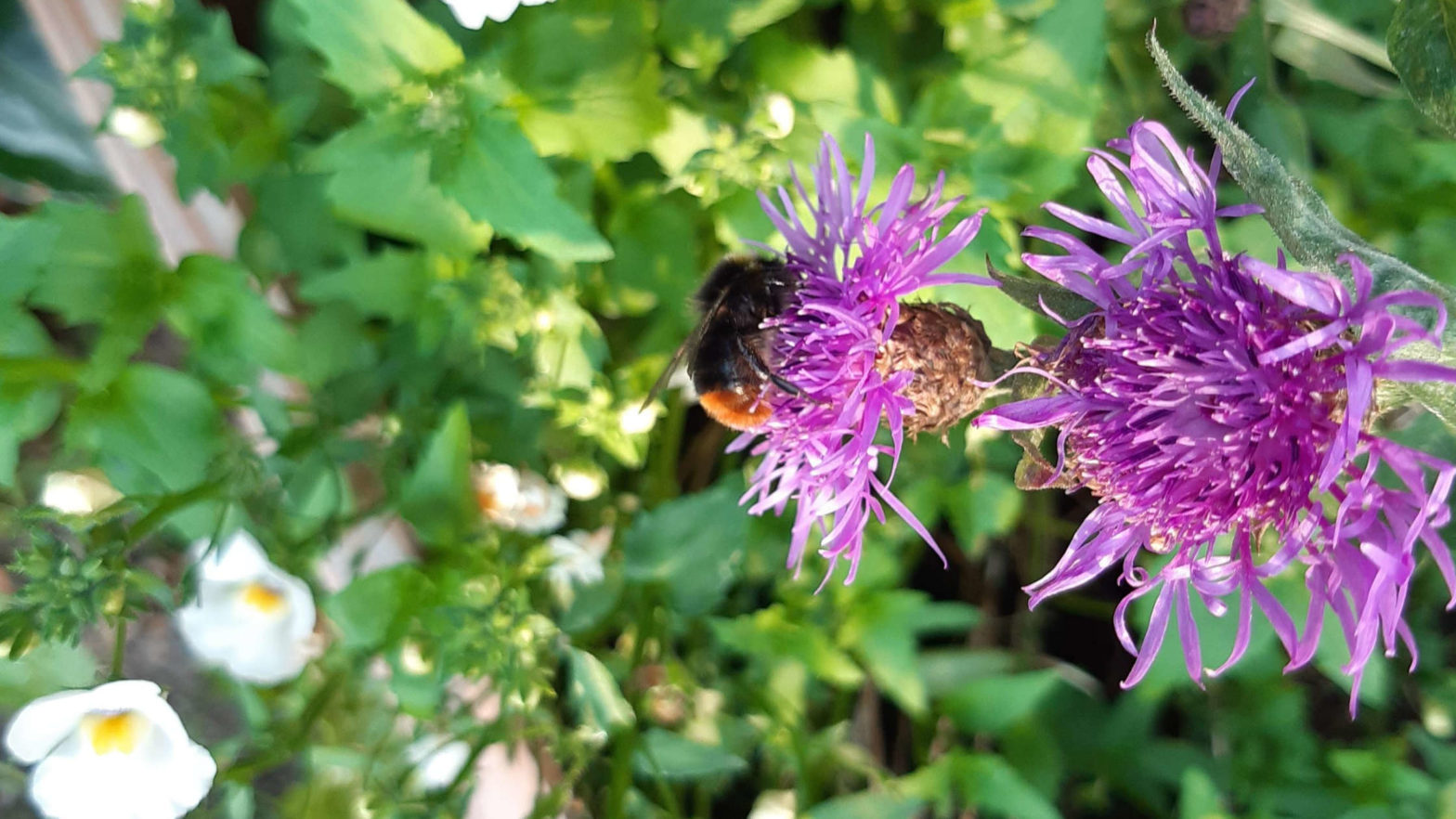 There are many bee myths out there. I discussed some of them already concerning honey bees last month. But today, it’s all about the myths that maybe aren’t as easy to spot. Nonetheless, they aren’t harmless at all. I’m not talking about “honey bees get all the attention and other bee species do at least the same”. True, but this is not what I’m talking about. I mean topics about bees that hardly appear in the general discussion. Or, if they do, the facts aren’t right. That’s why I call them “bee myths”.

Let’s start with the males. They’re often referred to as “flying sperm”. I’ve been guilty of this myself, to be honest. As a PhD student, together with a friend, we talked about honey bee drones like this. This may have been a reaction of two young women working with beekeepers – which in Germany very often are old men. After almost 30 years, hopefully, I’ve found more mature ways to deal with occasional “mansplaining”. But back to bee males: defaming them that way totally neglects the importance of reproduction – which is needed for stable populations.

Most studies about bee males, deal with this reproductive aspect: sex ratios, mating behaviour and success are the most frequent subjects when it comes to papers about male bees. Only a few talk about males as pollinators. I even heard the myth that they don’t pollinate flowers! Look at the red-tailed bumblebee drone in the photo above: he’s taking a few sips of nectar to get the energy for his hunt for young queens. But meanwhile, he’s also pollinating the flowers he visits. Males may not collect pollen on “purpose”, but pollen grains stick to their hairs. And they have a similar flower constancy as workers.

The situation with solitary bee males is even worse. There are not even specific bee myths (as far as I know), just quite a bit of neglect of their role as pollinators. Which is strange, because we know that they are deceived by orchids. The flowers pretend by their smell and appearance that they’re females. The males pollinate them while trying to mate with the orchid. Which may add to the “flying sperm” myth. But especially this example shows how much bee males add to the diversity of pollination systems.

I found only a few papers dealing with male solitary bees and pollination. However, those studying this aspect, find that males are very efficient pollinators, too. Even for food crops, like blackcurrant. Researching for this blog I noticed that between all bee myths, I find this “bee males don’t pollinate” most disturbing. They may not actively collect pollen. But they’re furry like females. Pollen grains stick to them. Considering that flowers are a good place to meet “the girls”, they often patrol around interesting flower patches and do feed on them also.

In the first post of this series, I explained what bees need with the concept of central place foraging. You may have noticed that I talked only about females. That’s one of the reasons I’m writing this post today. First, there are the males of course. They don’t build the nests. However, in some species, males wait for the females in front of the nest entrances. Therefore, they at least have to recognize suitable nesting habitat for them. A mining bee male waiting in front of a bee hotel wouldn’t be very successful… However, for them, the concept of central place foraging isn’t as stringent as it is for female bees.

Same is true for cuckoo bees. About a quarter of Central European bee species don’t build an own nest. For other regions, I don’t know the numbers. They sneak into nests of other bee species and lay their eggs inside. Like the bird cuckoo does. Many are quite shocked when they first hear about this. Bees have this clean reputation – they pollinate, ensure our food, safeguard biodiversity. Yes, of course. But things aren’t black and white. In addition, parasites – like cuckoos – do have quite an important role in regulating populations. Even if something is the best thing in the world – too much of it isn’t good. By this, cuckoo bees add to bee diversity. And, like males, they do pollinate when they visit flowers to feed themselves.

Busting some bee myths about their “clean” image

OK, so bees aren’t all “nice guys”, quite a few bee species abuse the work of other hard-working ones. That’s life, we’ll get over it. In the end, it’s quite fascinating when you think about it. But this maybe is my soft spot for parasites talking. You don’t have to share it. However, bees always pollinate, don’t they? Even the cuckoo bees do… There are no bee myths in this, aren’t they?

Well… I’m sorry to disappoint you, but yes. All bee species are pollinators, but not all individuals are. Some just take the reward, without providing the service. This is called “nectar robbing”. It happens when nectar is hidden very deep in the flower, a bee has a short tongue and is too big to just crawl into the flower. Or when a very small bee just walks straight to the nectar without even touching the pollen. Pollination isn’t trivial. Not every bee visit (or visit of any other pollinator) results in a pollinated flower.

Bee myths and “saving the bees”

You may wonder now why I ramble about bee myths. Why should they be of any concern for bee conservation? If people care about bees, they don’t have to know all this, do they? In my opinion, it’s extremely relevant. I get the impression that the “save the bees” hype is doing as much harm as good. I see bee hotels in garden centres that are death traps. Or plants praised as “bee-friendly” that, if lucky, may only attract some very hungry bumblebee. These myths cement the opinion that bees are all the same (i.e. something like honey bees) and that every flower will be fine. If you’re not the first time on this blog, you know this is not the case.

Of course, not everyone can be a “bee expert”. But these simplifications pretend as if this was that simple. Presenting “saving the bees” as something easy to do, something done in passing doesn’t do the seriousness of the issue justice. On a positive note, I hope that these little stories about bee males, cuckoos and nectar robbers made you realise the diversity of bees a little bit more. Look out for bee males, cuckoo bees and nectar robbers. Discover the true diversity of bees. And then, try to do what you can to help bees. Which, by the way, is much more achievable than every one of us trying to save them. Together, on the other hand, knowing what we’re doing, we have a much better chance.