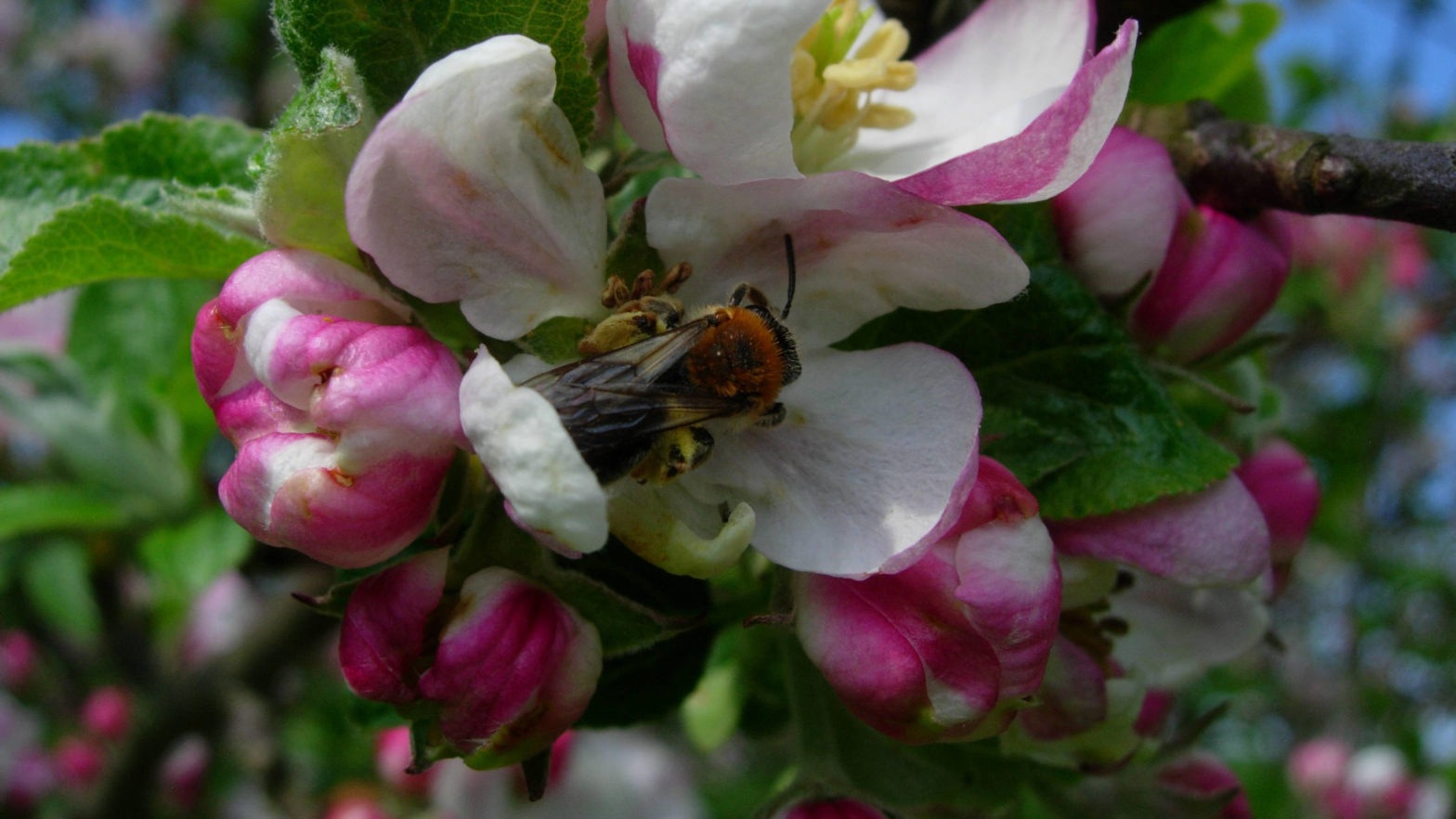 Silent hunger means a deficiency of nutrients that affects billions of people worldwide. When wanting to eradicate hunger it’s not only about the calories – the vitamins, the minerals, and antioxidants are important, too. And that’s where pollinators come in. I already talked about the – in my opinion – missed opportunity of including pollinators in the International Year of Fruit and Vegetables. In addition to the economic value, which you hear about most often, fruit and vegetables are important to combat this state of malnutrition. This, by the way, also occurs in rich countries like Germany. It’s a hunger you don’t see, because also apparently well-fed people can be deficient in important nutrients. But of course, it mostly affects developing countries.

The role of pollinators like bees in this isn’t very well-studied. But there are many good indicators that pollination is important for nutritional human health. For instance, one study found that 90% of vitamin C in food came from pollinator-dependent crops. As well as some antioxidants: lycopene, for example, is high in tomatoes or watermelons. Both pollinator-dependent, as well as all other sources for this substance. Another study analysed the situation in four developing countries (Bangladesh, Mozambique, Uganda and Zambia) and the nutrients vitamin A, calcium, folate, iron and zinc. All of them are important nutrients, and the study found that up to 56% of the populations in these countries could be at risk of silent hunger without pollinators.

My introduction to the subject of malnutrition and pollination was a highly interesting paper from Rebecca Chaplin-Kramer and her colleagues. It identifies the overlap of regions with frequent lack of micronutrients and the pollinator-dependent crops that provide these nutrients in these regions. For instance, vitamin A deficiency is three times more likely in areas with high pollinator-dependence. Children, in consequence, develop visual impairments or blindness and die more often from common childhood infections. Also, maternal mortality increases with vitamin A deficiency. Thailand, large parts of India, western Iran, Romania and large parts of Australia had the largest dependence on pollinators for the supply of vitamin A. As you see, not only countries that are the most common when you think of “hunger”.

Interestingly, the degree to which some regions depend on pollinators for the supply of micronutrients depends on their culture. Pumpkin, melons and mangoes are important vitamin A sources in these more vulnerable countries. In other regions carrots, sweet potatoes or spinach are more important. These crops don’t depend on pollination – as long as we’re not talking about seed production, where pollinators come into the picture again. We get similar patterns for other nutrients as well. Not all of them have such a high dependence: The bulk sources for iron, for instance, are cereals like rice, wheat or maize – no pollinators needed here. Not even for seeds. However, there are regions depending up to 15% on pollinators also for iron. And this degree of reliance on pollinators already increases the risk of complications during pregnancy, for instance.

The International Year of Fruit and Vegetables

FAO calls fruit and vegetables “dietary essentials”. They are. This is not to convince you of veganism or something like that. All the contrary, I’m totally against any dogmatism also in nutrition. Especially because food is also culture, it’s not only getting something into your stomach. But healthy nutrition, avoiding silent hunger, always includes fruit and vegetables. So, this is another reason why I think that it’s a missed opportunity to not talk of pollinators in the International Year of Fruit and Vegetables. These nutritional aspects are what FAO cares about. It’s them to talk about silent hunger and that it’s not enough to think only of the calories.

Nutrition is part of my personal story, too. My father in Chile was part of a group of health workers wanting to improve the health of people also in rural areas in the early 1970s. Nutritional programs were a part of that. When we had to leave our country after the military coup in 1973, he continued paying much attention to the nutrition of his children. By explaining what I needed and why, he helped me to find a healthy relationship with food. This is a completely different issue than malnutrition still occurring all over the world. But children in those regions have the right to develop as healthy as I did. I know my father deeply cared about this, and I do, too. Food has cultural, social, and health aspects. And pollinators play a role in all of these aspects. Sometimes more, sometimes less.

In the paper by Chaplin-Kramer and colleagues, they discuss also some ways of how to mitigate silent hunger in those regions depending much on pollination. One suggestion was to switch to crops that are less dependent on pollinators. This is wrong at many levels. First, because it’s patronizing to tell people traditionally eating pumpkin or mango for vitamin A supply to switch to carrots or sweet potatoes. Again: food has cultural aspects. The right way here is to seek ways how to make those pumpkins or mangoes more readily available for everybody. Not to tell people “eat this instead!”. It will be easier to increase healthy nutrition respecting these cultural aspects.

In addition, there are again the economic aspects as well. In my time in Thailand, I once visited a longan orchard in full flower. It’s a delicious fruit, very common in the Chiang Mai region where I was working. The orchard should have been buzzing with pollinators, but it was completely silent. The flowers were dripping of nectar, but no bees at all. Or flies, wasps or moths. The grower was concerned about the missing harvest, i.e., his income. Could I have told him “switch to another crop instead!”? Well… I think that doesn’t need an answer. We need research on the pollination systems of important crops in regions most vulnerable to silent hunger. And of course, immediate measures to halt the decline of native pollinators that help in the production of these traditional crops. Like scientists from Hohenheim did in Northern Thailand.

There would be lots more to say about the importance of pollinators for healthy nutrition. Again: they’re not the only important element, but they play a key role. In addition, we’re not getting less but more dependent on pollinators. There are already noticeable effects in countries like the USA, with the economy again being the most prominent argument. We need to focus more on the nutritional, cultural, and social aspects, too. They aren’t isolated from each other but connected. Also by pollinators. I’m glad if I’m able to contribute my two cents by showing these connections. By improving pollinator health, in the long run, we will also improve human nutritional health.

This post is part of my endeavour to end black and white thinking. I do this by explaining how much bees – or pollinators in general – and their health matter and how they fit in the “big picture”. If you want to learn more, you have three ways to do so: