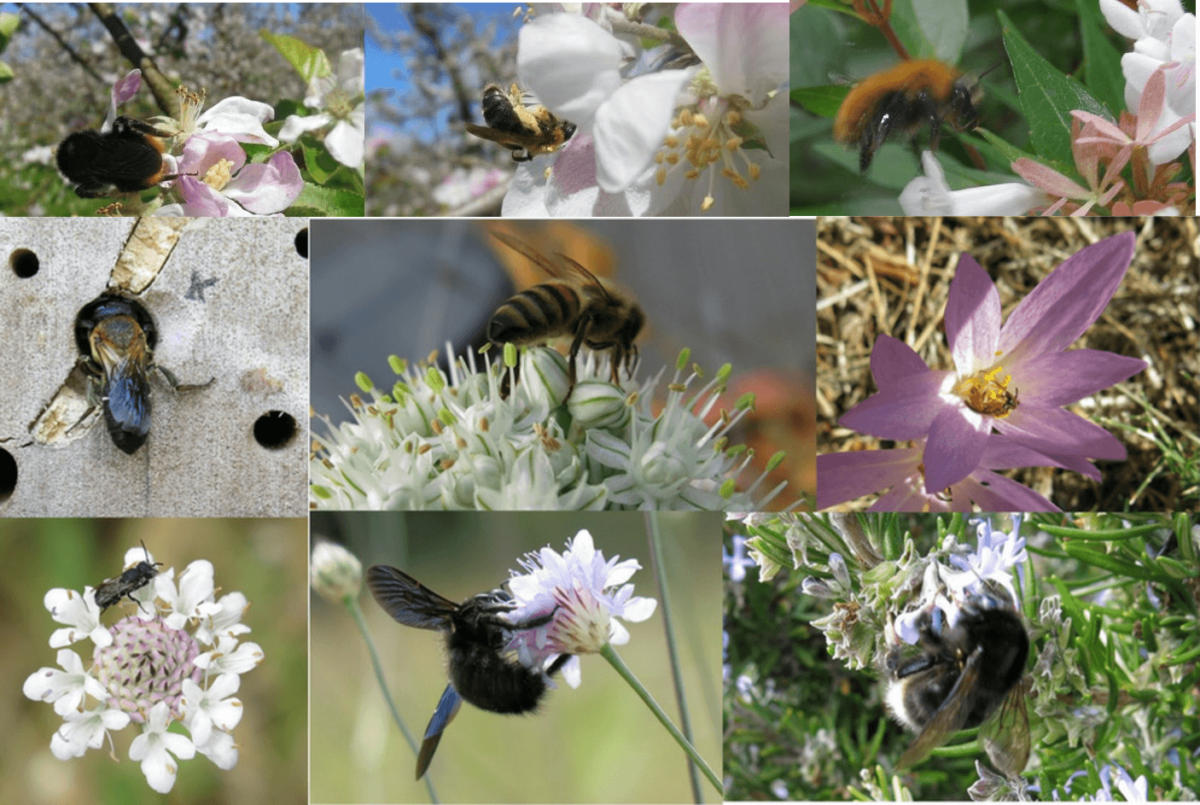 “Native bees” is a buzzword and is becoming more and more a synonym for all bee species except honey bees. Not even all honey bees: Generally, it’s used to contrast Western honey bees, Apis mellifera. It mainly comes from North American and Australian bee researchers. In these regions, honey bees aren’t native. Therefore, the contrast is totally legitimate. However, it’s a simplification and several things get mixed up here. I’ve already had questions and requests here in Europe calling non-managed bees “native bees”. But guess what. Honey bees are native in Europe. And in Africa. In addition, there are eight more honey bee species in Asia.

Sometimes people roll their eyes because I can be a bit pedantic about words. But believe me: I don’t say anything in 90% of the cases… only when I think that the specific word is important, and it really bugs me. This “native bees versus honey bees” is such a thing. I understand the motivation behind the wording. So, let’s get into that first. Introduced, invasive species are a problem for biodiversity. I once made a whole series about that. Only the introduction is still online, but if you want a relaunch, let me know.

Endangered native bees – and honey bees get the attention

In Australia, for instance, we have a unique and very diverse bee fauna. Actually, Australia is one of the hot spots for bee diversity. On the other hand, the beekeeping industry is huge there, too. A recent study observed the interactions between honey bees and native bees in gardens and remaining bushland in urban areas. The results were beautifully complex:

We found mixed evidence in support of the hypothesis that the introduced European honey bee exerts a negative impact on native bee assemblages.

A typical “it depends” answer. The competition wasn’t most severe when there were fewer flowers. However, resource overlap between native species and introduced honey bees led to fewer native bees. Especially in gardens. Considering that most people associate “honey bees” with bees, this may shift this baseline even further. In Australia, “saving the bees” means keeping their amazing bee diversity. Therefore, I totally understand and support Kit Prendergast, the main author of this study, in her activities to get native bees into the focus of attention. Both in the media as well as for garden owners.

Another example: Africanized Honey Bees (AHB) are a hybrid between European and African subspecies of Apis mellifera. This was done absolutely intentionally: Europeans brought honey bees to the Americas. A Brazilian honey bee researcher, Warwick Kerr, noticed that these European subspecies weren’t most productive in the tropical conditions he lived in. So, he interbred them with an African subspecies, A. mellifera scutellata. Well, this went well and wrong at the same time. While the productivity of managed colonies went up, AHB escaped the “controlled” experiment. The impact on native pollinators was mixed, too. However, when removing feral AHB colonies, the breeding population of the endangered Lear’s macaw increased. It’s not only about bees, sometimes also about birds.

Management practices and One Health

If you read this blog for a certain time, you know that I strongly advocate good beekeeping practices. Honey bees transmit diseases to other insects. This could have a special impact in areas where honey bees aren’t native. It’s a reason why I was so shocked when I heard Tom Seeley – who I usually appreciate as a scientist – talking about Darwinian beekeeping. European honey bees in a beekeeper’s care are managed animals. Even in areas where they’re native, this isn’t really “natural”. Bad management practices impact honey bee colonies and wild pollinators. This is independent of honey bees being native or not. Therefore, for me the contrast isn’t that much “native bees versus honey bees”, but “managed versus non-managed bees”.

One Health is the concept that links human and animal health (in the sense of domestic animals) with environmental health. Honey bees (and other managed bees for this matter) impact wild bee populations by their pathogens. This is a global issue that adds to the conservation of bee diversity I just discussed. Diverse bee communities, as we saw last week, help to maintain the health of both managed and non-managed bees. In this context, I think that the best thing to do is to address the issue from two sides:

Honey bee diversity is endangered, too

The thing is: in areas where they’re native, honey bees are part of biodiversity. In Europe, feral colonies are an exception. Together with my colleague Raffaele Dall’Olio, we tried to get a bit deeper into the value or threat feral honey bee colonies may be. What we couldn’t discuss in that piece: while I totally disagree with tendencies of “natural beekeeping”, I think that true “wild” honey bee colonies add to biodiversity where they’re native. For instance, in German beech forests, where they apparently are finding again more nesting habitat. Cavities in old trees are a rarity in managed European forests. There is still a lack of data about their infestation with the (non-native!) Varroa mite and their overall health. However, they belong to European forests. Not in the density beekeepers bring them to places. But they do.

There’s again another aspect to this. Apis mellifera has great diversity within the species. There are many subspecies. Some are widely spread, others are limited to certain areas, like the Sicilian honey bee, A. mellifera sicula. They don’t occur anywhere else. However, beekeepers mostly use two subspecies, A. mellifera carnica and A. mellifera ligustica (the Carnolian and the Italian honey bee, respectively). The Sicilian honey bee is endangered because of this. They mate while flying in the air, the queen doesn’t ask if the drone is sicula or ligustica. Some researchers propose how to maintain honey bee diversity within their native range.  As they put it:

…increased efforts to protect wild populations of honey bees – A. mellifera across its native range as well as other honey bee species in Asia – are essential to maintain the genetic diversity and ecological functions of this fascinating genus of social insect.

As you see, “diversity” has a variety of meanings. It’s not about “good” native bees and “bad” honey bees. The issue of biodiversity loss affects all of them. It affects us. In my humble opinion, we have to be very careful how we use words. We must make clear in which context we’re using them. When Australian researchers talk about “native bees” they exclude honey bees. When European or African researchers do, they include them. This “it depends” sometimes gets lost in the discussions.

A final aspect to why I think words are important, why we have to be careful. There’s an increasing tendency to transfer the invasive species discussion to human society. This, to put it in an educated way, gives me nausea. Human migration and the ecosystem impact of invasive species are two completely different things. I don’t want that my engagement for biodiversity gets abused for such disgusting nonsense. That’s why I get pedantic when talking about “native bees”.

This article is the third of a series on bee diversity. The week I write this includes two important dates for bees: first, there’s World Bee Day on the May 20th. Two day later, May 22nd, is the International Day of Biodiversity. So, what better opportunity to write about biodiversity and bees?

It is also part of my quest against black and white thinking. Things are complex, but not necessarily complicated. If you want to understand these relationships, I’m here to help. I’ll be doing courses on bee diversity including all the “it depends” and “what ifs”. If you have a specific issue, just contact me. A first 20-minute strategy call is free, to see how and if I can help you. I’ll be happy to help with your bee health questions, but if it doesn’t fit, that’s ok.