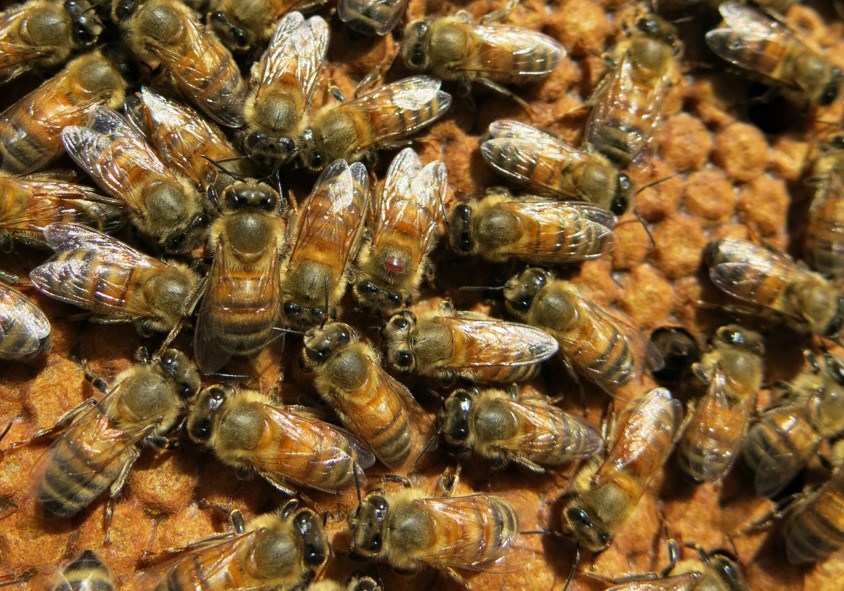 This week the news of a new silver bullet for the fight against the Varroa mite spread all over the media. It was about the discovery that lithium chloride acts against this honey bee parasite. Not only is it the first new substance after a long time, it’s also very easy to use: by feeding it together with sugar syrup. The notification based on a publication on the first results with this substance, which are actually promising. But – and this is a big one – the colleagues themselves don’t promise the all-time-solution for Varroa treatments. Knowing them personally, this would have surprised me immensely. There is still work to be done until this first promising investigations result in a new product.

Lithium chloride – the story of a coincidental find

In fact, the story is a quite unusual and lucky one. The scientists were trying to develop a new way of treatment against the Varroa mite, but in a quite more sophisticated way. Actually, they were trying to “switch off” some essential genes of the parasite by feeding substances that “translate” the genes into proteins. But the big surprise was that they had the same efficacy also feeding the control solution – that didn’t contain any of these substances. Therefore, there was something else.In fact, this is the most exciting part of science: when you find something unexpected. Surprisingly, the active ingredient was lithium chloride which was in the buffer solutions used in the tests. The next step was to dig deeper: what is the most efficient concentration? Do the bees tolerate the treatment? They approached these questions with cage experiments, feeding different concentrations to the bees. At the end it was clear that already very low concentrations kill the mites on the bees. The caged workers tolerated it well, too, and fed on the treatment solution without showing repellency.

Still a long way to go

Laboratory tests are only the first step in developing a new varroa treatment. Honey bees aren’t solitary insects, they are social and live in complex colonies. The results from 50 bees in a cage cannot be transferred to full colonies. The researchers did a good job in going step by step, starting with a simple set-up in cages. In a second step, they tested if feeding lithium chloride to artificial swarms showed the same results. It did, though the efficacy was slightly lower. This already indicates that the story isn’t as easy as it seems by reading the news. Swarms already are closer to a full colony, as the queen is present and there are much more bees (the tested ones had around 20,000). The dynamics between the individuals is more realistic than in the cage.However, swarms aren’t full colonies. The most important difference is the lack of brood. If this treatment is combined with the feeding before winter, there is still brood in the colonies. This again changes completely the dynamics of a treatment. Most importantly, it has to be safe for the brood, too. This isn’t approached in the publication and I’m very sure the authors are aware of this problem. We don’t know also if the efficacy decreases further in full colonies as it did in artificial swarms. When will be the best time to treat, in what concentrations, only once or repeatedly? Is there a risk of resistance or do residues remain in the bee products? All these questions have to be answered, before lithium chloride finally becomes a registered varroa treatment.

Safety for bees, beekeepers and consumer

Only after completing this process of testing and registration there will – hopefully – be a medicinal product which not only kills the varroa mites, but is also safe for the bee colonies, the beekeepers and the consumers. Before this happens, every use of lithium chloride isn’t only illegal but also risky. There are already beekeepers asking for the new substance. They think that they finally get a cheap and easy alternative to the existing treatments.I have to admit that the hype around this publication irritated me deeply. The original press release, on which most newspapers and internet sites based their news, was more than dubious. It doesn’t help that it got corrected after two days, the story was in the world. The press release was “pimped” in a way that does the contrary of what surely was intended: it undermined the reputation of good and serious researchers. I can’t blame the beekeepers for asking where to get lithium chloride and how much they have to feed their colonies. They didn’t read the original publication. Newspapers etc. used a sensation mongering press release, I can’t blame them either for not reading the original paper.

About the dangers of not communicating properly

But, the press office at the University of Hohenheim did a horrible job. Knowing the senior author of the paper for 20 years now, I can’t imagine that he used the words “silver bullet” as they appeared in the first version of the press release. This was the total contrary of good science communication. A press department should translate science for a general audience, put the researchers of its university in a good light. They did the contrary and, again, it doesn’t help that the notification got corrected later. The news and hype was out there in the world and out of control.In addition, I only hope that there is no beekeeper just buying lithium chloride, feeding it to his colonies and then overdosing it so much that he kills them. Because: every medicinal product has secondary effects. It’s the dose that makes the poison. As we don’t know enough about this substance yet, every illegal “practice test” puts the whole development under risk. The news “this stuff kills colonies” would be much more persistent than the more differentiated information about dose, time of the treatment etc. Let’s hope that this thoughtless handling of scientific results doesn’t kill a promising treatment before it had a chance.