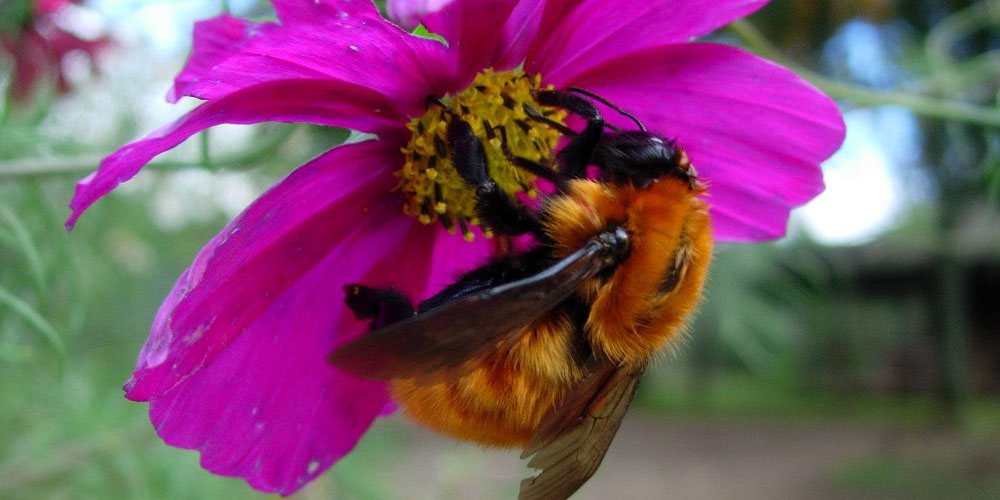 This week, invasive bees kept my mind busy. First, there was the news that a Chilean lawyer would sue the government. How this relates to bees? Well, he is going to court because of the introduction of European bumblebees to Chile. This has brought the giant Chilean bumblebee, Bombus dahlbomii, close to extinction. I have already discussed this several times, including my very personal story of it. To my knowledge, suing a government because of an alien species is a new occurrence. Usually, environmental issues at court deal with chemical pollution, I think. Without really knowing it. In any case, this is an interesting case and I hope it will have success.

The other thing that drew my attention again to this issue, was the mail of a Dutch radio reporter earlier this month. She wanted some information and my opinion on the situation in Chile. Why the European bumblebees were introduced and why they’re doing so much damage. I did my best on the phone and she also visited me this week to speak more in detail about it. We spoke about conservation and biology, but also about the economic aspects and political decisions. Unfortunately, there are always multiple aspects to consider, it’s not a simple black or white question.

Let me clarify something from the start: I think that introducing species deliberately is wrong. Especially if it’s into fragile and unique ecosystems like those we find in Chile, Australia or other countries with singular flora and fauna. The awareness is generally high when it comes to insect pests or other species that have a negative image (“weeds”, “parasites” etc.). In fact, when I flew the first time again to Chile after leaving it in 1973 the stewardesses passed with insecticide spray through the cabin to prevent the introduction of insects. I held my breath and wondered how much this would avoid anything, but the intention counts. This was in 1993, the first exotic bumblebee species was already introduced in Chile for ten years – B. ruderatus – with less dramatic consequences*. Only four years later, B. terrestris made its way into Chilean greenhouses and avocado orchards as a pollinator.

The funny thing is that both these crops are American. Therefore, there should be native pollinators perfectly doing the job. I don’t know if, but assume that the intensified agricultural production of both tomatoes and avocados brought the need of additional pollination services. The sustainable solution, investigating the native pollination systems and how to support them to increase crop yield takes time and is cost-intensive. So why not introduce commercial pollinators? It’s easy, we know it works and at the end – they’re pollinators, not pests! History proved them wrong, unfortunately. Also beneficial insects may become harmful. So the reason for introducing European bumblebees, was economically legit, but an ecological disaster. I don’t know either if at least this disaster increased crop yield. Which wouldn’t really comfort me…

Invasive bees damaging each other

Apparently, the damage B. terrestris is leaving behind goes further than its giant relative. It’s now transmitting diseases also to honey bees, as discussed in this blog post (from “Salvemos Nuestro Abejorro”, in Spanish). The latter are invasive bees, too, so this isn’t really a conservation, but again an economic problem. And this shows how complex this is. Economics isn’t “bad” per se. Beekeeping is an important source of income and in Southern Chile, a very special honey is produced – miel de ulmo, from a tree that is native to Chile and Argentina. In Chiloé, the honey bee populations already declined. In Argentina the nectar robbers B. terrestris apparently decrease the nectar availability for honey bees in raspberry orchards. I wouldn’t dare telling a Chilean or Argentinean beekeeper that his/her problem isn’t as bad as the extinction of B. dahlbomii. There are families depending on this income, such a statement would be insensitive and disrespectful.

However, I don’t like that these problems mixed up. It’s kind of ironic that two species of invasive bees damage each other. Also honey bees spread diseases, they also outcompete other bee species by their sheer number in some areas. But now, in Chile and Argentina, they found their master in another exotic species. Again, this is a socio-economic issue, that has to be solved, but not by putting it as a biodiversity loss. I wonder about the threat to other native bee species in Chile and Argentina because of the diseases transmitted by B. terrestris. The areas where it was first introduced for avocado pollination, are exactly those areas considered a hot spot for bee species in Chile. Perhaps I better don’t think too much about this.

*José Montalva from “Salvemos Nuestro Abejorro” corrected the date I had put for the introduction of B. ruderatus. It was introduced 1982/83, not 1993 as stated originally. Thank you for this!