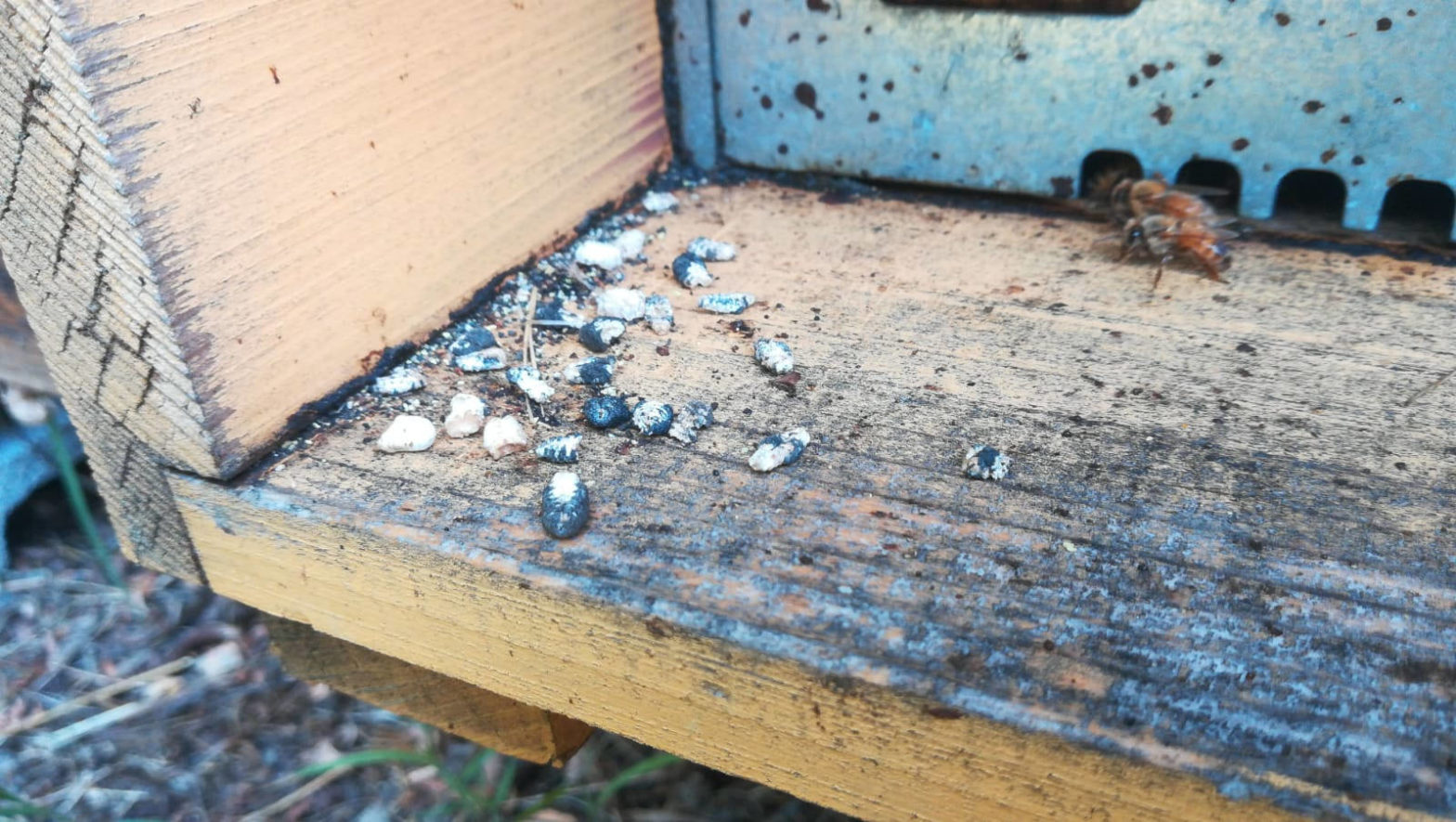 Honey bee health management – that sounds like something very abstract and technical. Like something that interests beekeepers who want productive colonies. Something economic, but nothing that connects to bee diversity. Or bee health as I defined it some weeks ago. There seems to be a barrier between those managing bees – mostly Western honey bees – and those who want to conserve bee diversity. You often find the sentence “saving bees by beekeeping is like saving birds by keeping chicken”. I do agree on some aspects of this. Honey bees are exceptions in the “bee world” in many aspects. They aren’t chicken, though.

My wise father taught me to think beyond barriers. And this one between beekeeping and conservation isn’t as final and unmovable concerning bee health. At least not as much as that sentence could make you believe. Bear with me, I’ll explain.

First, let’s start with managed honey bees. Without any judgement on their “worth”, or blaming beekeepers for anything. I already wrote about honey bee diseases that can spill over to other bee species. Namely DWV in consequence of varroa infestations and Nosema ceranae. These are major problems in beekeeping, well-known and studied. Other diseases, like the fungal chalkbrood, don’t “score” as high when we talk about honey bee health. It’s generally considered a factorial disease, something the colonies can deal with for themselves. Most importantly perhaps, a disease without major economic consequences.

A recent case, however, made me think again. At a well-kept apiary, one colony showed symptoms of chalkbrood. It didn’t stop after spring, at every visit, there were about 20 mummies in front of the colony. Not that much, you might think – what are 20 lost bees in a colony of 30,000*? Yet, this colony didn’t develop like the others. It began filling up the honey super later than its neighbours. And the yield was lower than the average on this apiary. Nothing too obvious, but still there. So, what happened?

Good practices as an element in honey bee health management

The main difference to the other colonies, in this case, was the position of the affected colony. It was the first in a row. It was the most exposed to cold winds. Cold is one of the major risk factors for the development of chalkbrood. It was a well-kept apiary but lacked some bushes or trees as protection to the North.

This is a good example of honey bee health management in a wider context. The quality of the apiary is one of the most important factors to keep colonies healthy. They should be protected against the cold, but well ventilated to avoid humidity. Which is another risk factor for chalkbrood, by the way. Then, I will never get tired of repeating this, the colonies must have access to diverse pollen sources. This makes honey bee colonies less susceptible for all kind of diseases, chalkbrood included.

From the beekeeper’s side, avoiding robbing behaviour and exchanging combs regularly keeps the risk of transmitting diseases low. Do you see it? Honey bee health management goes beyond varroa treatments. What’s still missing, you might say, is the connection why this helps bee diversity.

You might already imagine what I want to say: managing honey bees in a way that keeps them healthy, prevents their diseases from spill-over to other species. This is also the case in underrated diseases like chalkbrood. Which I learned only today was detected also in bumblebees. In their excellent review on fungal diseases in managed and wild bees, Sophie Evison and Annette Jensen conclude:

The historical research focus on honey bees should shift to include wild and solitary species, because they tend to be less resilient to environmental stressors (including pathogens).

Something may seem of less importance to us, like chalkbrood. But how do we know, if we never studied it? Honey bees are an exception within managed animals: their contact with the environment is much more difficult to control than in other species. You can’t keep them in a stable, like chicken. Honey bee health management is closely linked to environmental health – the health of wild bee species.

In the end, this also affects human health. Because all bee species are pollinators. Disease spill-over, together with other factors, causes bee (diversity) decline. A very recent paper says that crop production in the USA is frequently limited by lack of pollinators. Which then affects food security and by this human health. Here we close the One Health circle…

Of course, honey bee health management alone won’t prevent pollinator decline. In many aspects, keeping honey bees does help bee conservation like keeping chicken saves wild birds. Honey bees are social, they are managed, not native in many places of the world – you name it. But I hope that you now see that when it comes to bee health, the barriers between managed and non-managed species are quite… porous. So let’s think beyond them and not simplify.

*It doesn’t matter directly in this context, but it’s a myth that honey bee colonies are up to 80,000 bees strong. Counting the brood cells as well, perhaps. But in more than 20 years estimating honey bee colonies I’ve never seen more than 35,000-40,000. And those were fantastically strong ones!