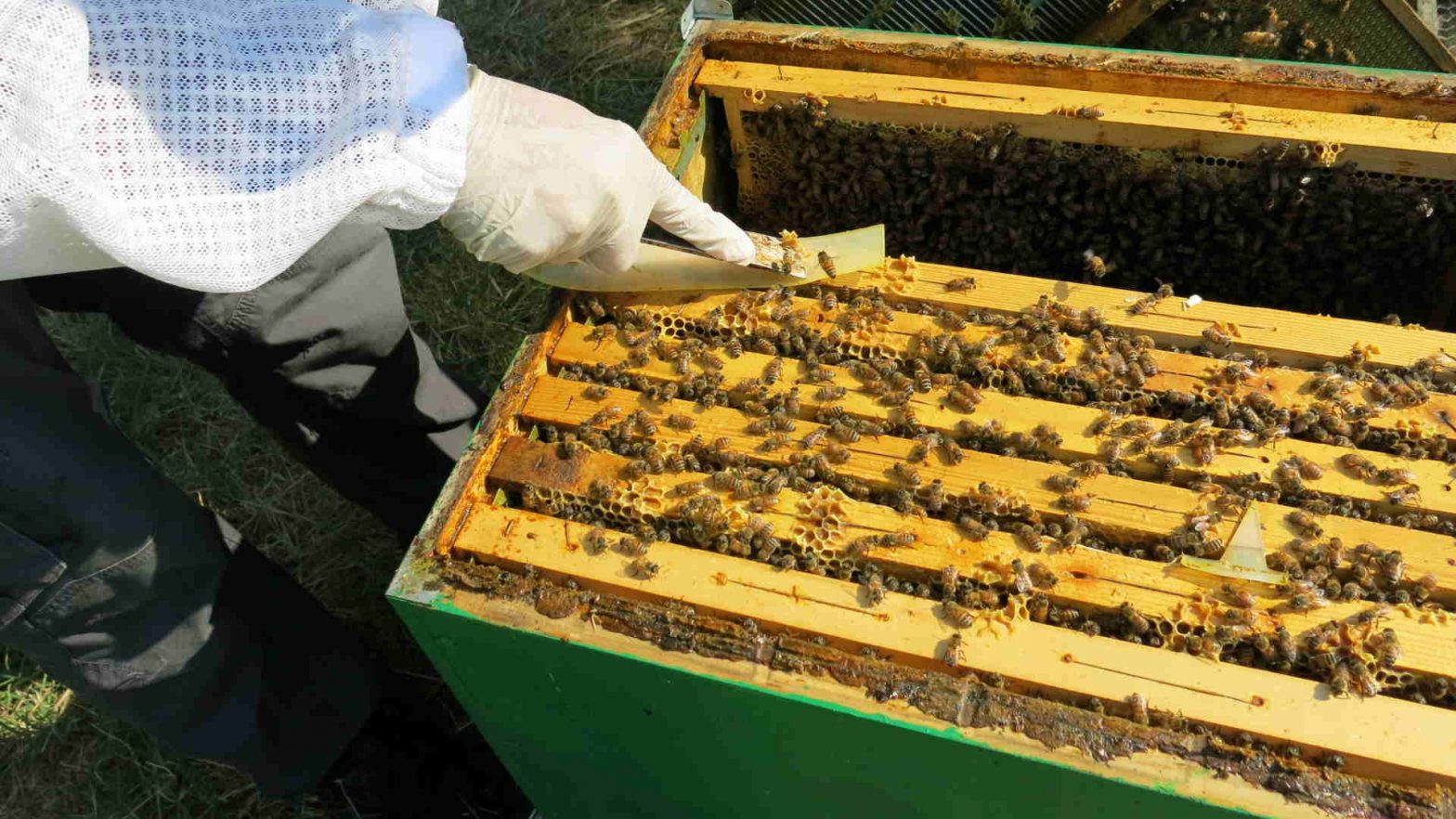 In my last post, I described how my approach to bee health changed over the years. From focussing on single bee diseases (mainly varroa…), my view got much broader. The One Health concept – which I discovered only last year – gave my ideas a frame and a name. Which I’m very happy about. It’s always good to know you’re not the only one and that a large institution like OIE is backing up your main ideas. However, beekeeping – especially good beekeeping practices – aren’t yet included in this concept.

Despite having this broader perspective, details remain important. That’s what I pictured as “zooming in and zooming out” in my last post. You can change the whole by changing a small detail. This is why good beekeeping practices are important. They influence bee health – or should I say pollinator health? – at various levels. So let’s zoom into the first one.

In my talks, I often say that beekeepers have to think more of their bees’ needs instead of their own. Because I’m convinced that only healthy honey bee colonies are productive. Unlike a common belief that a good honey harvest indicates a healthy colony. A small colony won’t bring the same honey harvest as a large one. But is it small because of a disease? This would mean small equals weak. Or is it just a nuke and small because it didn’t develop yet? On the other hand, a large colony could produce a massive honey yield – and break down a few weeks later.

In this context, it’s important to think long-term. The honey harvest is a snapshot of the conditions at a certain time. Colony health, on the other hand, is a long-term trait. It’s what maintains the assets of a beekeeper. Often they don’t consider what losing colonies over winter costs them. An example: here in Germany, honeydew honey is a thing. However, this is a late honey crop. In some years, harvesting this honey may mean that the varroa treatment arrives too late. Because the tipping point of the exponential growth* of the mites was just at the moment when the foragers were happily collecting honeydew.

Good beekeeping practices, in this case, mean to evaluate the risk and the possible benefit. To carefully chose the colonies with low infestation for this crop and an isolated site for avoiding any disease transmission between apiaries. Not to forget to treat the colonies immediately after the honey harvest. And maybe also to renounce this crop for a year if chances are that it wouldn’t be great and doesn’t justify the risk.

Beekeeping and conservation of biodiversity

Keeping managed honey bees healthy, therefore, is the first and most important duty of a beekeeper. It’s in their own interest. Especially, as beekeeping is often promoted as a measure to protect biodiversity. I don’t agree with this and already talked about why beekeeping doesn’t “save the bees”. Beekeeping actively promotes only a single and managed species – Apis mellifera, the Western Honey Bee. Biodiversity includes all species, in case of bees more than 20,000 of them.

However, there are two aspects in which I could agree with this statement. First, there is diversity within A. mellifera. Different subspecies all over its distribution range. This diversity is the expression of local adaptations. A study all over Europe from the COLOSS breeding group some years ago showed that colonies from local origin survived longer than “alien” colonies. Good beekeeping practices in this context mean helping in the conservation of regional subspecies. It keeps me wondering, though, what this means for regions where Western Honey Bees aren’t native.

Second, and this is related to my former objection, it’s protecting other insect species by proper health management for honey bees. In this blog, I already discussed why I’m an advocate for managing honey bees properly instead of the recent tendencies to “natural or Darwinian beekeeping”. The main threats for honey bee health these days aren’t natural. Beekeeping isn’t. In addition, not controlling honey bee diseases puts other insects at risk. This risk may be especially large in regions where honey bees aren’t native. Here, health management becomes an additional dimension.

This, for me, is the main reason for good beekeeping practices, for good health management in honey bee colonies. I consciously say “health management” and not only “varroa treatments”. First of all, you have to make sure that honey bee colonies stay healthy. By providing a good site with plenty and diverse flowers. Good nutrition makes them resist diseases and other stress factors better. By working in a way that disturbs them as little as possible. And also by controlling diseases.

Yes, this means also varroa treatments. But I again consciously said “controlling diseases”. This includes biotechnical measures as well as treatments. For instance, it’s known that brood interruptions help to control Nosema ceranae infections. Together with the Deformed Wing Virus (DWV), N. ceranae is a honey bee disease that “jumps over” to other insect species. Both DWV and N. ceranae may do this also “naturally”. Still, there are much more honey bee colonies at a single site because of beekeeping as there would be in natural habitat.

With more honey bee colonies come also more parasites and pathogens. Especially if – and here we close the circle – good beekeeping practices aren’t respected. They help beekeepers to work better, have higher quality products, maintain their colonies healthy and, within the concept of One Health, also do their bit to conserve biodiversity.

*Side note: exponential growth, in this case, means that the varroa population in a colony doubles every month.