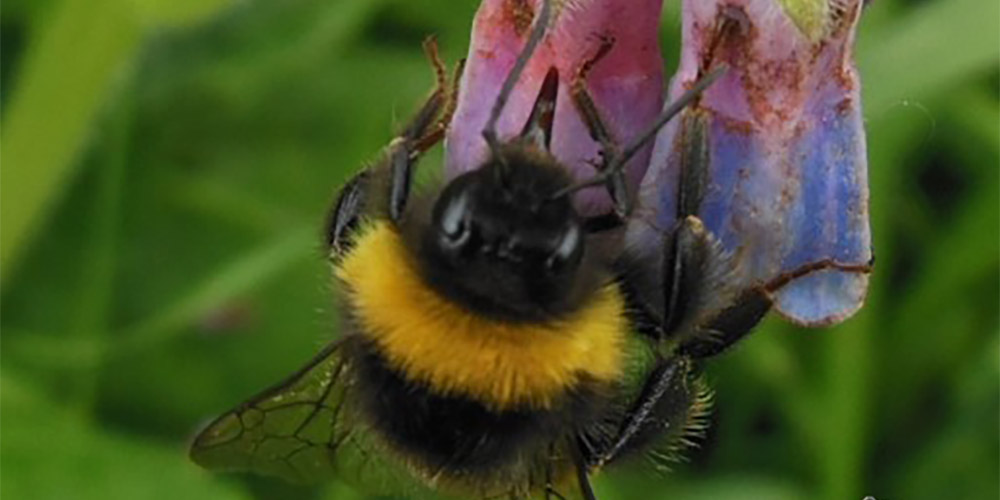 Flowers and bees have a mutualistic relationsship: this is what we are all taught at school. Flowers give bees a reward for pollinating them – seems to be a win-win situation. But, as often, this does not get the whole picture. There are also bees that steal the reward without giving the service: nectar robbers. A good candidate for the role of the villain is the buff-tailed bumblebee (Bombus terrestris). This common bee has a short tongue, but strong mandibles. So what do they do, if they cannot reach the nectar with their short tongue? They just bite holes into the corolla.

An then even a short tongue can reach nectaries in a deep corolla. Of course without passing by the stamens and taking some pollen for the next visited flower.

This means a cost for the plant: it has to replace the nectar meant for a helpful pollinator really doing its job. The tissue damage may also enhance diseases on the flower.

Too many bees for single flowers

In a stable pollinator-plant network, these little robbers may not have larger consequences. In their native environment, the abundances of robbing and honest pollinators may be equilibrated. (Though… I have to check it this has been studied in undisturbed systems.) After introducing pollinators in a new environment, the situation changes. I have already commented on the almost extinction of Bombus dahlbohmii, the world’s biggest bumblebee. The suspect in this case is also B. terrestris, by trasmitting diseases. This case affects me personally, but beyond this it may alter also plant reproduction.

As stated in a review from Aizen et al. in 2014, alien pollinators can reach very high abundances. That much, that the mutualistic relationsship between bees and flowers turns into antagonism. In Patagonia, introduced buff-tailed bumblebees and honeybees reached such high densities, that raspberry flowers are visited up to 150 times a day. You may think that this is great, but it is not. For effective pollination raspberries need only about 10 visits. With more, the cost for the plant by nectar replacement, damaged stamens and other damages gets too high. This has consequences also for the fruit quality: “over-pollinated” flowers produce berries with less druplets. In my mind’s eye, reading this I saw completely frenetic bumblebees working on a already fainted flower…

Aizen and his co-authors state that
Such extreme abundances of invasive A. mellifera and B. terrestris could cumulatively increase interaction costs. Although both species can effect pollination, high visit frequency can reduce reproductive success [of plants]…

As you can see, quantity does not mean quality. But the negative impact goes even further: alien pollinators help alien plants. This may be the case Cytisus scoparius, which got more invasive in North and South America with the presence of B. terrestris. In consequence, also the plant communities are disturbed, finally causing a chain reaction for the whole ecosystem and its biodiversity. All this by cute, hairy bumblebees.

If in the case of nectar robbing the “villain” is the bee, in this case the one to blame is very human. The cited paper concludes that further introductions of alien pollinators should be discouraged. I totally agree. Obviously it is difficult to oversee all consequences of such introductions, we have already experienced it many times. Maybe we could finally learn from our previous errors?