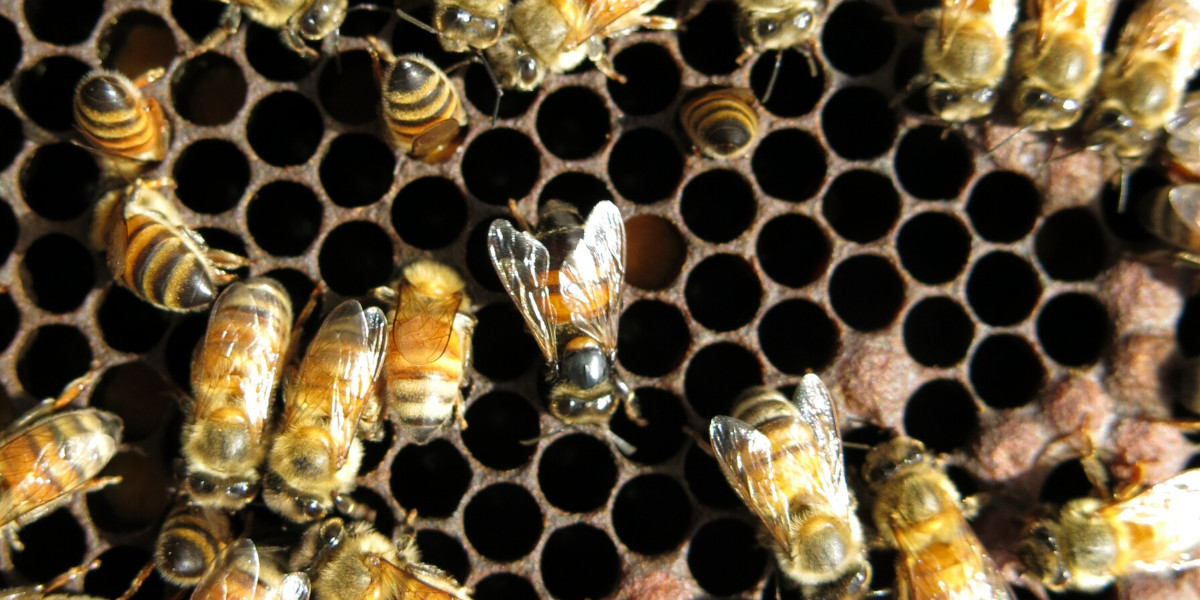 Honey bee viruses didn’t seem to be a major issue for a long time. At least, they weren’t in the focus of beekeepers – and not that many bee scientists either. This changed quite a bit: first, the varroa mite transmitted the Deformed Wing Virus (DWV) leading to one of the most prominent symptoms of varroosis – the deformed wings. Since the early 2000s, however, virus infections are more and more on the rise. Both in prevalence and in awareness of bee researchers. This was mainly because of “Colony Collapse Disorder” (CCD), leading to massive colony losses in North America. Viruses were within the discussed causes for this.

The problem with honey bee viruses: they mostly don’t have very clear clinical symptoms. DWV is an exception in this aspect. However, ABPV, for instance, often shows up when it’s already too late. The beekeeper finds a mysteriously empty hive with only the queen and a few workers left. As the “acute” in the name suggests, this infection has a quick development.
Another virus that is getting more and more attention is Chronic Bee Paralysis Virus (CBPV). This is another one with clearer symptoms. The bees are hairless and look greasy, the wings form a K, and they tumble like a drunk. Other workers isolate them, often at the nest entrance or on the top bars of the frames.

Is CBPV an emerging disease?

When I first saw CBPV in 2003 or 2004, it was a rare infection. So rare, that a colleague at the institute I worked in at that time didn’t believe me. But the following PCR analysis confirmed my suspicions. I was sensitized by an excellent talk by Magali Ribière at the EurBee conference in Prague. Moreover, I’m lucky to have a good eye for habitus, what I call my “diagnostic eye”. Recently, a paper by Budge et al. suggested that CBPV is becoming a “serious emerging threat to honey bees”. The paper made news, especially in the current times of COVID-19. One newspaper even named CBPV the “coronavirus for bees”. My obvious eye-rolling about this too bold headline apart, this may be a good graphic description of what we’re treating with.

Emergent infectious diseases newly appear in a population or rapidly spread in incidence or geographic range. Both factors are true for CBPV, though the pathogen itself is known already since 1963. Outbreaks were rare in former times, which explains the reaction of my colleague when I returned to the institute with a bee sample and my observations. Since then, I see it quite often. This could be an observation bias – you see only what you know – or indicate that this virus is actually spreading. The recent paper gives good indications for this.

Increasing prevalence and intensity in the UK

Budge and colleagues did an epidemiological study in England and Wales. Over a period of 11 years, they visited almost 7,800 apiaries and mapped the incidents of infection. The resulting maps speak clear: in 2010, there was a single cluster in Northern England. In the following years, the maps look like as if England and Wales had a severe rash. Interestingly, the “papules” didn’t get larger. They “jumped” over the territory: in different years the affected areas were far apart.

The authors explained this with beekeeping practices – namely moving colonies around the country for honey crops or pollination services. Professional beekeepers had a higher risk than hobbyists – they move their colonies more often and over larger distances and may act as “superspreaders” of CBPV. The data clearly support the hypothesis that CBPV is an emergent disease. Also, observations from other countries show similar patterns. In Germany, the national monitoring reported high prevalence mainly in 2013, with similar geographical clustering as in England and Wales. Personally, I’ve seen clinical symptoms in every country I’ve done studies.

The most striking case I ever saw was in Austria: in one colony even the queen was infected. Tumbling like a drunk, attacked by the few remaining workers of the colony. This was also a case showing that honey bee viruses still don’t have the awareness they need. Symptoms of CBPV may seem intoxications: with progressed infection, you may find hundreds of dead bees in front of the hive, the survivors trembling and tumbling… the first association of the beekeeper in such cases concerns pesticides, not diseases. In the Austrian case, however, the apiary was in a forest, at a great distance from any agricultural activities. And though sometimes some strange individuals spray pesticides inside colonies just for the “joy” of destruction, this usually affects more than one colony.

We never can be sure about the true cause of colony losses without lab analyses. This may be the first lesson from this. However, this case also shows the importance of good practices – both in beekeeping and in agriculture, by the way. To stay with the viruses today, the most important prevention measure is hygiene. Honey bees can’t wash their hands, obviously. In a honey bee colony, hygiene doesn’t involve soap and water but exchanging old combs by new foundations regularly helps. As well as isolating infected colonies on separate quarantine apiaries. Writing this I become aware that the comparison with COVID-19 is more oversimplifying than completely wrong. However, it’s my job to stress the nuances.

… and monitoring of honey bee viruses

In addition to good beekeeping practices to prevent virus infections of all sorts, scrupulous monitoring of honey bee viruses may add to future research. Honey bee colonies are highly resilient against stressors, and they’re always exposed to several of them. What was the final straw that broke the camels back isn’t always as clear as the public discussion suggests. Monitoring doesn’t solve this problem but can give valuable insights on “real life” situations and indicators for interactions between stressors. It’s often the foundation for further research.

Finally, there’s something else may be similar between the current pandemic and the spread of honey bee viruses: the need for education and science communication. Also in beekeeping, there are sometimes conspiracy myths like “bee researchers are all bought by the pesticide industry (sic!) to deceive us about the real causes of honey bee colony losses”. Sigh. The thing is, and I’m sorry to say this, that the world isn’t simple. We have to work on several problems at a time and be aware that it may be an intoxication in one case, CBPV in another and malnutrition in a third one what affected the colony. I won’t get tired repeating this: when we only focus on single details, we won’t solve any problems.

How to: oxalic acid treatments against varroa