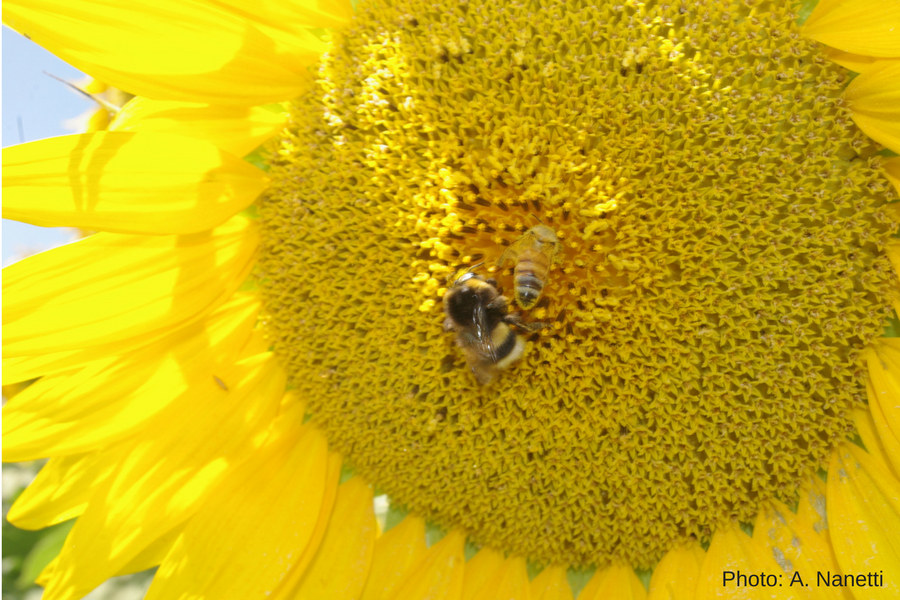 Happy New Year! Last year finished in a rush and with the changes on my site, the last post on this blog got lost. So, here’s the recapitulation on how social or solitary life-histories influence overwintering, foraging and reproduction. And I’m including some health aspects, too -I missed these in the last post. This will be the last chapter of the social evolution series – in March I’ll start a new one on pollination. But for today, I want to give some examples for the impacts a solitary or social lifestyle has on different aspects of a bee life.

Winter is not really a bee season. They like it warm and need flowers, both a limited resource in winter. One of the most frequently asked questions I get about bees is actually: what do bees do in winter? Usually people mean honey bees, but of course my answer relates to all bees and is “it depends”. To avoid eye-rolling “oh no, not again this differentiation stuff”, let’s begin with honey bees. European Honey Bees, Apis mellifera, to be precise (can’t help it…). This species is highly eusocial, which means that it lives in colonies all year long and for multiple years. In temperate climate, they have to deal with the cold as a colony. They do so in forming winter clusters. In the center, in the warmest place, stays the queen. The workers “rotate” from the inside to the outside and back again.
[Winter-heat]

By this, they keep the core temperature around 35°C. They heat only the parts of the cavity where they are, unoccupied places remain cold. Also bumblebees are eusocial, but “primitively eusocial”, characterized also by the solitary phase of the queen in winter. This means the colony dies in late summer and only the young queens overwinter after mating. These queens don’t produce warmth during the cold months, they go into a dormant stage. But, as bumblebees are the polar bears among the bees, they come out with lower temperatures than most other bee species. This may be already with 5°C, as soon as the first flowers come out.

Finally, we have the solitary bees. How they overwinter depend on their activity season. Early spring bees, like the Red Mason bee develop until adult stage in their cocoons. They’re then ready to hatch as soon as temperatures and day-length are appropriate. Summer bees, on the other hand, overwinter as a pupa or larva. They finish their development in spring, as they have to “be ready” only later in the year. As I said: it all depends.

On the photo above the post, you see a honey bee and a bumblebee taking some sips of nectar. These individuals may have stayed on sunflowers, optimizing the handling of the visited flowers. But other individuals of their colonies surely foraged also on other plants. Social bees, can’t “afford” to specialize on certain flowers. They’re active during the whole vegetation period, they have colonies to care for, they need much food for a long time! An exception to this rule are some bumblebee species in boreal areas, where summers are short and the flowering period of some plants and the flight season are the same. But as a rule of thumb, social bees are polylectic, generalists when it comes to the flowers they feed on. Solitary bees, on the other hand, have shorter activity periods, they can specialize. Actually, some solitary bee species are very picky eaters.

But there’s also another difference between foraging in social and solitary bees. I observed it working in sunflower fields a few years ago: the social bees went for the nectar, the solitary species for the pollen. In fact, I observed only a very small fraction of honey bees and bumblebees in those fields with pollen loads. The solitary (including all the shades of social evolution) were very busy taking the pollen, I hardly saw them drinking nectar. I didn’t do any in depth research on this, but social bees need energy (nectar) reserves for their colonies. The pollen stores are much smaller. Solitary bees provide their nests with loads of pollen, adding only little nectar. So their life-histories explain the different foraging behaviour. As I said, I didn’t dig deeper into this, so any further info or corrections are welcome.

Health is another aspect in which solitary or social life-histories strongly influence the traits. Every animal species has a series of parasites and diseases and defence mechanisms. Again, as a rule of thumb solitary insects have more individual defence than social species. This is because they have something called “social immunity“. This is studied again mainly in European Honey Bees, but it may apply also for other species. In summary, a colony behaves like a mammal in building barriers against diseases. In three tiers, they defend their borders, their “body” (colony as a whole) and their reproductive system. For instance, single workers infected with viruses are isolated or thrown out of the colony and the queen is tended only by young workers, which are less likely to be infected with diseases.

Solitary bees on the other hand can’t rely on the help of the community. But they may specialize on plants like sunflowers to protect their brood against parasites. Actually, parasite and disease pressure is one of the factors that may have triggered social evolution. Which means giving up reproduction for many individuals, after all. Already communal species have the advantage that there is always “somebody at home”. Parasites may have more difficulties to enter the nest, like it’s less likely that burglars come into your house when you’re there. I’m wondering how much these differences influence the susceptibility to new diseases – like the transmission of honey bee viruses on other bee species that I discussed in the health series. As always, more questions than answers.

Finally, there is another big question remaining considering bee life-histories: why do individuals give up reproduction to “serve” a queen? Already Darwin was puzzled about this and it continues to be a tricky question. The advantages for health may be one factor. Another model explains that due to their reproductive system workers are more related to their sisters than to their offspring. This is because males are haploid (have a single set of chromosomes) and females diploid (having a double set). Assuming that a (honey bee) queen mates only with one drone, this means that they share only half their genetic information with their potential offspring, but three quarters with their sisters. But: honey bee queens mate with many drones, not only one. In this case, the model doesn’t work anymore and also every other explanation has its flaws. But as Richard Feynman said:

It is our responsibility as scientists… to teach how doubt is not to be feared but welcomed and discussed.

I say it in a simpler way: I do science, not religion. But let Feynman’s more elegant and wiser words be the theme of 2018. It may help in so many aspects of life.