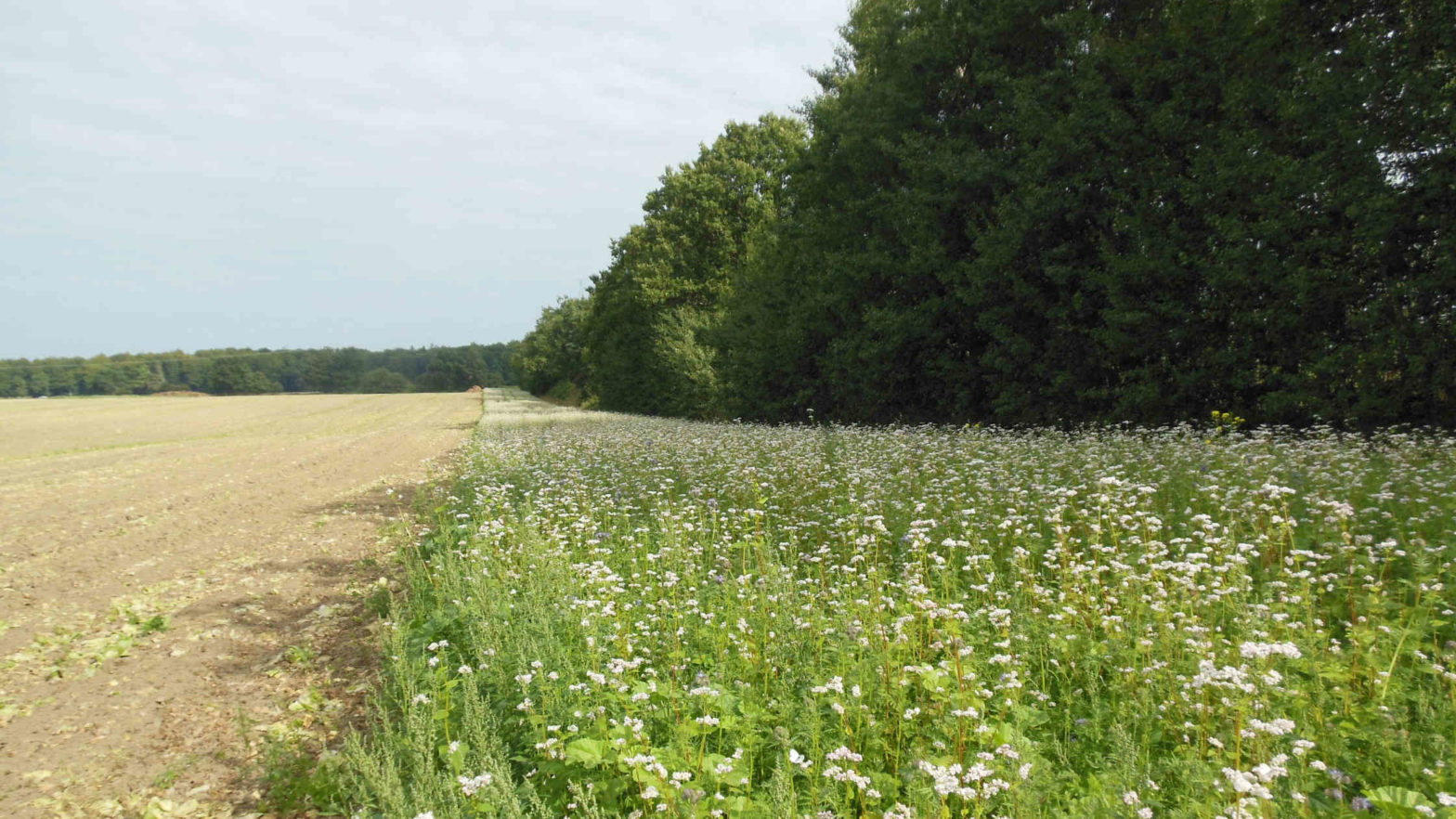 Flowering strips seem to be a go-to when it comes to helping bees in farmland. They’re meant to be a countermeasure against the floral deficits because of intense agriculture. And of course, flowers and bees, they’re the perfect match, aren’t they? Yes, they are. However, you may already imagine that I’m not an unquestioning fan. Why? Well, first of all, flowers alone are not enough. Bees also need nesting habitat. This doesn’t mean some bee hotels and that’s it. It means bare soil, hedges and other structures to attract a variety of bee species (and other insects).

Secondly, I often wonder if there are any thoughts behind these flowering strips. The composition is often more for the human eye than for pollinators. A recent publication showed that non-native flowers add floral resources for generalist bees. Apparently, they get the same number of visits like native flowers. Field margins aren’t natural habitat, so the protection goal in this case may not target bees specialized on certain flowers. However, they could be nectar and pollen rich, at least. They could be more diverse to attract as many pollinators as possible. Not only honey bees and bumblebees. Because crop pollination needs diversity.

Finally, and this is the point I want to discuss in this post, the management of the flowering strips often doesn’t help. Within the common agricultural policy of the EU (CAP), many EU countries established agri-environmental schemes (AES). Flowering strips are an essential part of this, but the framework isn’t clear enough: farmers can also chose a mixture of different cultivars instead of wildflowers. For them it’s the easiest: it’s cheap and they know how to manage the strips.

Farmers get subsidies for providing floral resources instead of using these areas for their crops. The funding period usually lasts five years. After that, the farmers can use these areas for crops again. I don’t know how frequently this happens. Often farmers use areas for flowering strips or other AES that aren’t easy to reach. Like an odd corner of the field or a margin with a slope that makes it difficult to use their machines. They certainly won’t use their most fertile field for this. The positive thing about this: it’s more probable that they will continue managing these areas as floral resources. Meaning that insect communities that established during these five years won’t get swiped out again. This is possible under the current CAP, increasing the ecological value of the measures. But again: I’m not sure how often this happens.

Flowering strips should show a succession from annual flowers in the first year, two perennial species in the following years. In addition, to fulfil their aim to provide food for pollinators, they should show a minimum coverage with flowers. Some grasses add to the flowering strips, but if they take over, they don’t add floral resources. A group of German scientists studied how well different seed mixtures establish and keep the flower coverage over the five years’ period. In addition, they also wanted to see which management could help to maintain the flowers over the funding period and possibly beyond.

Costs and management of flowering strips

For maintaining species-rich meadows, they’re mowed once or twice a year removing the cut material. Flowering strips, on the other hand, are mulched. This could enhance that grasses overgrow the flowers after a few years. In this study, mulching took place in March and August. The scientists compared how well three different seed mixes established with this management and how the flower coverage developed over the years.

The first seed mix was the most common: a low-diversity mix of different flowering crops. It’s quite cheap (70€/ha), which is an argument for farmers. And totally legitimate: the funding aims to balance the income shortage due to the AES. Farmers don’t get their expenses back, the subsidies are lump sums. In a second group, the researchers used a mix of regionally adapted wildflowers and crops. This seed mix is already much more expensive – about 300 € per hectare. Finally, what would be my Christmas wish if I could decide on the flowering strips all over the EU: a mix of diverse native wildflowers, regionally adapted in their species composition. A bee biologist’s dream. With a cost of 600 € per hectare.

The value for bees and other pollinators

It’s not a big surprise that the wildflowers were most successful. They established well and weren’t overgrown by grasses or other unwanted plants. They maintained the highest coverage even beyond the funding period – 75% coverage after seven years! The mix of crops and wildflowers did quite well, too, still covering 70% after seven years. Unfortunately, the low-diversity crop seeds failed completely. They didn’t establish well and already in the third year only two of the species in the mix remained in the strips. Which means that the value for pollinators as a food resource was almost gone.

The good news: mulching twice a year didn’t reduce the flower coverage in the areas with wildflowers and the mixed seeds. This is good news because it’s low-maintenance management for the farmer. However, this makes me think about the CAP again. It’s a good first step that the greening payments allow that the flowering strips to remain beyond the five-year period (i.e. into the next funding period). On the other hand, the measures should be as effective as possible.

If farmers don’t get a clearer framework, seed mixes with mainly flowering crops will remain the most common. A tiered approach could help: the payments could depend on the ecological value of the flowering strip or other AES. There’s another important point, though: farmers need support establishing these measures. It’s not enough to pay them without attending to the effectiveness and feasibility of the measures. They need consultancy on the way to do what they can. To do something for bees, for biodiversity, our food security, and their income. That’s what we need a political framework for.

This post is part of a series on bees and agriculture. In November of 2020, I discuss four recent papers on the topic. It’s a complex area, much more than you could think hearing the discussions on “save the bees”. Agriculture needs biodiversity, needs pollinators, and, therefore, bees. Flowering strips are one of the measures that help them. One part of a puzzle. If you need help in figuring out how this could look like for your association or region, contact me. You can do it over the contact page or follow my social media.