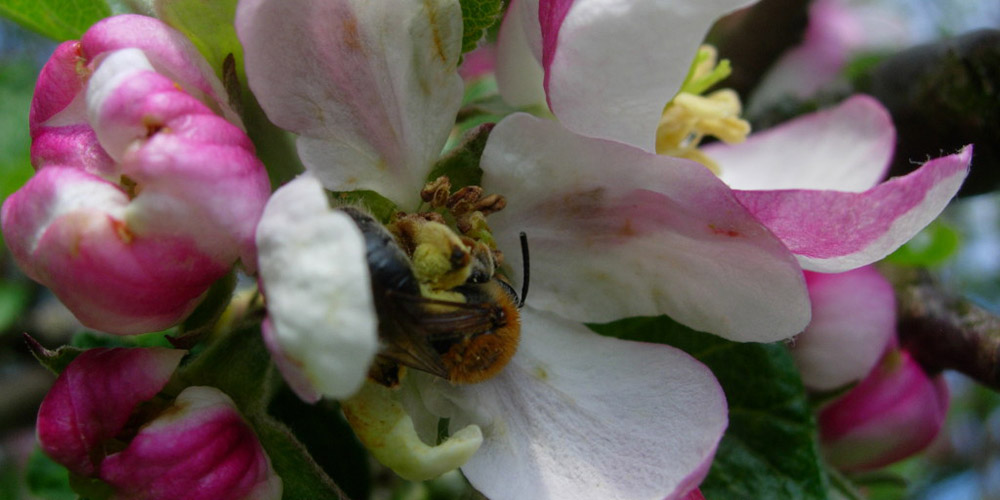 Try to think of the last time you had a heavy cold. You felt weak and not really motivated to work, right? Diseases obviously affect our capacities, from being sluggish because of a cold to unable to leave the bed with high fever. Well, it may be very similar for bees: honey bee workers parasitized with Nosema apis – a gut parasite – are less likely to forage than their healthy colony mates. This is one of the main results of a study published in 2015.

But of course, it is interesting to look a bit into the details: the researchers infected freshly hatched honey bee workers with N. apis, in very low amounts. This was to simulate an infection that is there, but does not show any clear symptoms. They then observed the foraging behaviour throughout the life cycle of the single workers. What they found was quite compelling: the infected bees were less likely to go foraging than their healthy “colleages”. And when they did, they started at an older age and, this is important, carried less pollen. They were 4.3 times less likely to carry pollen, than uninfected bees.

This result is fascinating: it shows that diseases affect more than only the individual. It may not be obvious at the first sight, but, the authors of this study discuss the impact of Nosema in the context of pollination. They also found (in an artificial chose experiment) that the infected workers preferred “nectar flowers” over “pollen flowers”. They hypothesize that the bees’ ability to pollinate is reduced by the parasite. It is true that honey bee foragers touch the anthers of a flower even collecting nectar. But if they go for pollen, they work on the flower much more intensely. This may influence the pollination success, though this still needs better proofs.

There is another aspect which isn’t completely discussed in this paper. It’s about the consequences of Nosema infections at a colony level. Infected workers probably forage more nectar than pollen, because they are under “energetic stress”. The parasite lives within the gut cells and – so to speak – takes the energy of the host. In addition, infected bees cannot metabolize proteins correctly. Amongst other effects, this also reduces the longevity of individual bees. In social bees like honey bees this creates a vicious cycle of feedback mechanisms. If foragers don’t collect pollen and don’t metabolize proteins correctly, also the larval nutrition suffers. This means a “weaker” next generation of workers, which are also more susceptible for diseases. Do you see where this is going?

From honey bees to bumblebees

The cited paper deals with Nosema apis, which is nowadays often replaced by N. ceranae. This is another emergent parasite, whose original host is the Asian Honey Bee Apis cerana. To make a long story short: this parasite is one of the most neglected bee diseases. This is mainly because it doesn’t show clear symptoms: no diarrhea, no bloated abdomen or similar symptoms. The clearest sign is an unbalanced relationship between workers and brood. The brood seems “normal”, but there aren’t enough adults to care for it. This parasites is assumed to cause even higher energetic stress than its relative N. apis. Therefore, the above-mentioned effects may apply also for this parasite. At the end, there are weak colonies. These do not only collapse individually, but – because of the crowding on apiaries – affect also neighbouring colonies. This horizontal spread favours – you may have waited for this – also the spread to other bee species.

Like DWV, also Nosema ceranae spreads together with honey bees to bumblebees. The connection was less clear than for the virus in a study in UK, however, there is a connection. Already in an earlier paper, N. ceranae was found in native bumblebee species in Argentina. Six bumblebee species carried the parasite in their mid-gut. The most worrying finding of that research to me is that also queens and males were parasitized. In honey bees, Nosema infection of queens is the main reason for queen mortality over the winter. If this is true also for bumblebees, this may result in severe effects on the populations of these species.

Consequences for the pollinator community?

I’m not sure (and I don’t find anything now), but I think I remember that N. ceranae was also found in solitary bees somewhere. Which increases the impact also of this honey bee pathogen on the whole bee pollinator community. We still don’t know if N. ceranae has the same effects on other bee species like on honey bees. There are big knowledge gaps in this area. We need both research and conservation work to encounter this problem.

I am wondering if the impact of other domesticated animals on wildlife is as big as from the honey bee on wild bes. Maybe yes, I don’t know. In the case managed honey bees and non-managed bees the consequences may be less striking than from bigger animals. But, they hit a very basic ecological function, pollination. And this affects us directly in our most basic needs: food safety. Pollinator decline is concerning also policy makers because of this. However, this concern may be too narrow-minded. Honey bees should be taken into account not only as best known pollinators. But also as vectors for diseases to the wild pollinator community. Which makes the management of honey bee diseases not only a conservation, but also a food safety issue.