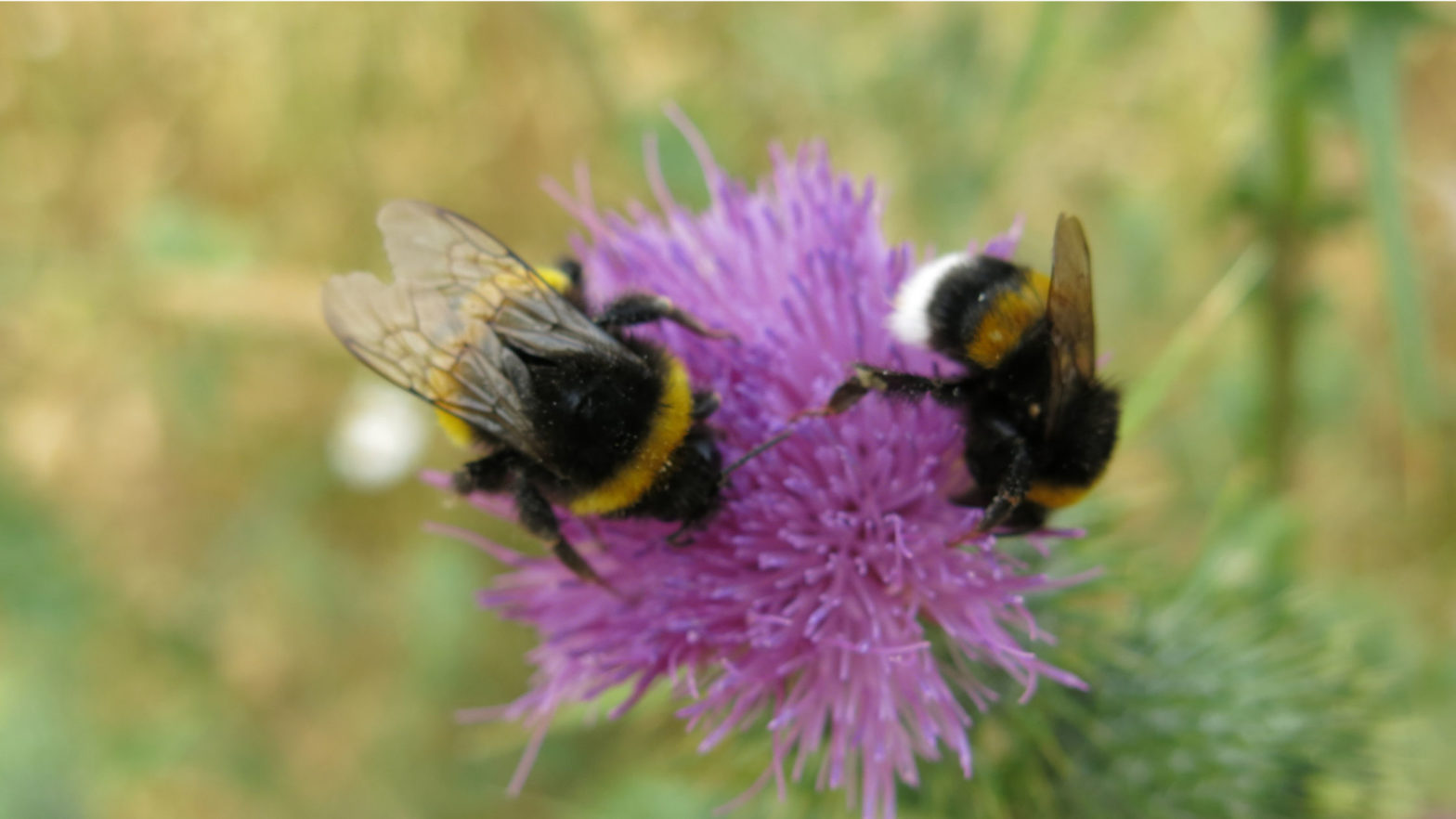 Bumblebee ranges are a bit different from other bees. As a rule of thumb, bees are most diverse in regions with Mediterranean climate. Bumblebees, on the other hand, like it cooler. I like to call them the polar bears between the bees. This is funny, because, as I learned today, in China apparently they’re called “bear wasps”. China is also the diversity hotspot for them: they have 125 species! The majority of them occurs in the coolest regions – mountainous areas in the Western half of the country. So, as I said, some odd distribution patterns. There are also species that occur in warmer regions, obviously. But “per default” bumblebees like it cool.

They even have a kind of internal antifreeze: Bernd Heinrich describes that beautifully in his book Bumblebee Economics. This makes them a good example for this series: Species that don’t like high temperatures are most vulnerable to global warming. Even those species that live in warmer regions may have an upper-temperature limit that is below other bees. I’m just guessing here, from the observation I make each summer that I almost don’t see bumblebees in the hottest hours of the day. However, the point is: bumblebees may be more susceptible to rising temperatures which could limit their distribution ranges.

There is a trend for many species to shift their distribution towards the poles or to higher altitudes. For bumblebee ranges, this is best described for North America and Europe. Their temperature preferences are restricting their habitat. In some species, the Southern limit of their distribution is shifting North. Species that occur in warmer regions are “escaping” to higher altitudes, where the temperatures are still lower. Apparently, this occurs especially in Europe: They climbed 300m since 1974! Species that lived in Northern regions didn’t show these changes in occurrence at higher altitudes. At least not that much. Overall, the possible habitat for bumblebees is getting “compressed” into those areas that still have the preferred temperatures.

I’m not aware if this is happening in China, too. It would be interesting to know, considering their high diversity. However, this habitat “compression” has consequences. Bumblebees are important pollinators, precisely because they like it cool. I’m already waiting for the first bumblebee queens, they’re between the first bees to appear after winter. Some wild plants, as we learned last week, rely on bumblebee queens for pollination. The workers’ resilience against cold makes them excellent pollinators in fruit orchards. They fly already when honey bees don’t even think of it. That’s a valuable trait in early spring.

Changes in distribution have consequences

You’re maybe wondering why you should care about the shifts in bumblebee ranges. Well, because this “compression”, the limited habitat, has consequences. Imagine a region in which bumblebees can flourish which is surrounded by areas that are unsuitable for them. This could be an island or a natural area surrounded by an industrial zone. The larger this “island”, the more bumblebees can live there. Both in the number of species, as well as the abundance of each species. Suitable bumblebee habitats in North America or Europe are such “islands”. Very large ones, but islands nonetheless. They’re getting smaller, and, therefore, they can host fewer bumblebees.

Not every bumblebee is the same. This is the very origin of my interest in bees. In my third year of university, I did a course in evolutionary ecology. In small groups of two, we worked on little field projects for four weeks. I chose bumblebees and together with another student we observed different species visiting flowers on a transect in the university garden. We noted that some species visited open, easily accessible flowers, while others fed on the deep and complex ones. It was a good exercise in observing and interpreting – we got little more than some material to determine bumblebees and plants. This is how I learned about short- and long-tongued bumblebees.

The reason I’m telling you this story relates to climate change as we’re discussing it today. Plant-pollinator relationships are very diverse. The functional traits of both parts (tongue length, flower anatomy etc.) shape the relationship. If bumblebees are crammed together in smaller areas, this has consequences also for the plants they pollinate. For instance, bumblebees not only like cooler temperatures but also are highly efficient pollinators in higher altitudes. There are some species that occur only in these elevations. The species that are now shifting to higher altitudes because it’s getting to warm for them in the valleys are more competitive. This means that they may displace the species that were originally living at these heights.

A group of Swiss researchers studied this in more detail. They found that the species originally living in high altitudes were the losers of the bumblebee range shift. Both because they were less tolerant of the warming temperatures and because of the “invaders” from lower heights. The response to the habitat shifts wasn’t the same for all species. Some bumblebees lost more than 90% of their habitat, which may lead to the loss of cold-adapted species in some areas. Again, the rarest species with the highest specialisation are the biggest losers. One of the consequences of this was also the homogenisation of functional traits like tongue length. Which then changes the interactions in the plant-pollinator community. Which in turn changes the community itself. More recent research is showing that these mountain specialists may be even more vulnerable than arctic species.

From bumblebee ranges to the puzzle of impacts

As you may see, the impacts of climate change on bees are manifold. While reading these papers on bumblebees, I was wondering how solitary species adapted to cooler temperatures may react. Or those living in wetlands, which also are cooler habitats. The impacts are adding up and with them the stability of ecosystems and the world we live in. It’s not only about bumblebee ranges. The solutions are as complex as the impacts. Partly, it may boil down to conserving and restoring habitat. But issues like phenology mismatches need a variety of measures to stop or at least slow down global warming.

This post is part of a series on the effects of climate change on bee health. I’m dedicating February 2021 to this topic and will show different aspects in four different posts. For deeper insight, I’m available for talks and seminars – online or in real-life, pandemic permitting. Contact me for more details.