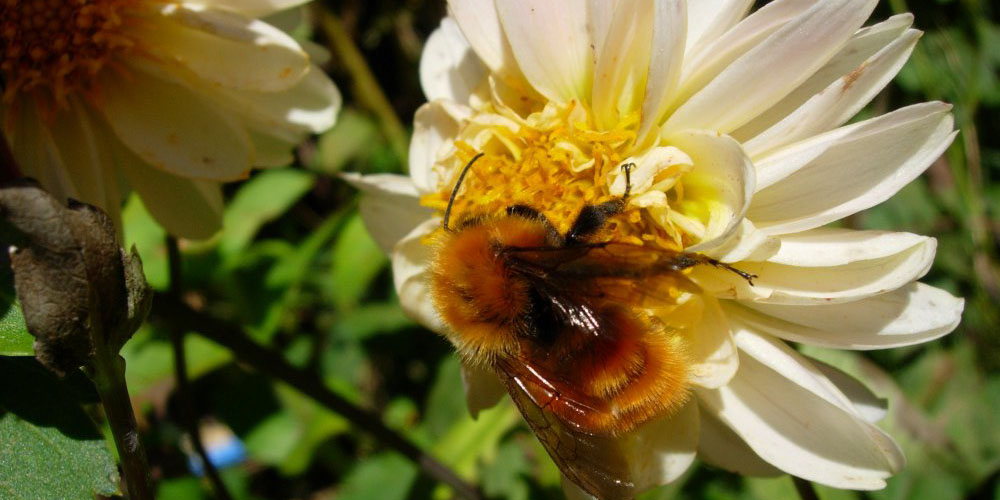 When I heard that Bombus dahlbohmii is near to extinction at the EurBee conference in Murcia last September, I was shocked. It was just a small part of Dave Goulson’s plenary talk the first day of the conference, only a comment before coming to the main argument, the impact of pesticides on bumblebees.

For me this news – though not that new anymore – is worth nearer consideration. B. dahlbohmii is a beautiful bumblebee, distributed in central Chile and Argentina to the south of both countries. It is especially impressive because it is so big – the queens can be up to 4 cm long! In Chile, it was the only bumblebee species until the introduction of B. ruderatus in 1982/83 and B. terrestris in 1998 for pollination services. These two foreign species expanded their range massively. B. terrestris was introduced for pollination in greenhouses and “escaped”. From this moment, wherever The European species spread, the native giant bumblebee disappeared. The discussion about the causes are ongoing. Already five years after the introduction, the European species was the most abundant and widespread species in northwest Patagonia (Argentina).

It shows again, what harm can be done by introducing species into foreign ecosystems. It may be by accident, but very often is done consciously like in this case. And it shows also that even species that usually are not considered as harming for an ecosystem – a bumblebee! – can be so if they are not in the area they belong to. There are some discussions about competition between the European and the native species, but also about the introduction of pathogens. In fact, it seems that together with B. terrestris, two endoparasites got into the system: Crithidia bombi and Apicystis bombi. The latter apparently was not present before the introduction of B. terrestris. But the cause itself for the disappearance of B. dahlbohmii remains unclear, as these are only correlational but not causal explanations.

You may think: “OK, it’s just one bumblebee species replaced by the other. They should be all the same.”. But this is not true. On the one hand, species are not isolated from each other, they are part of an ecosystem that may be more or less stable. In addition, one pollinator cannot replace the other. They handle different flowers in different ways, fly at different times, prefer different flowers – only diversity creates and maintains diversity. In the case of Chile, there is also another fact to consider: you can see this country as an island, though it is on the South American continent. In the north the Atacama desert, in the west the Pacific ocean, in the east the Andes and in the south the polar regions. Islands have fewer species than continental regions and a higher rate of endemic species. This is true also for Chile, its geography and its biodiversity are unique. B. dahlbohmii is (or perhaps already was?) a part of it.