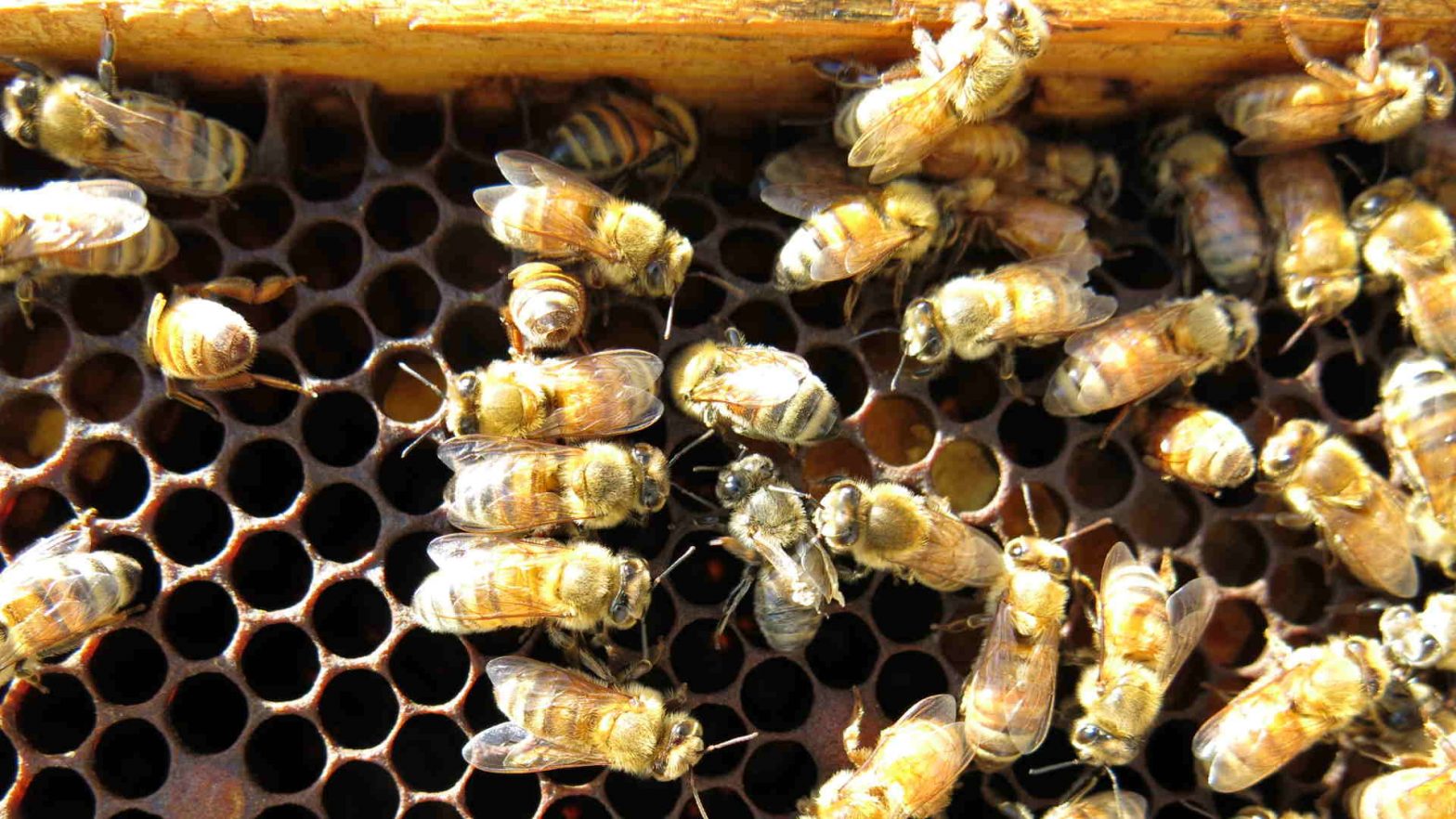 Bee viruses became a hot topic in the past years when talking about bee health. Especially DWV – as an associate with varroa mites. It’s one of the few viral infections in honey bees with clear symptoms. Though… you see them when it’s already to late. Crippled wings are a symptom not only for the virus, but also for a high varroa infestation. The only “cure” these infections are good and timely varroa treatments. And hoping for enough healthy winter bees. In fact, many researchers consider the association of Varroa destructor and DWV as the main driver for winter losses worldwide.

However, not seeing the symptoms (crippled wings and sometimes a shortened abdomen) doesn’t mean that DWV isn’t present. In the second year of the SARS-CoV 2 pandemic we all know that viruses are tricky. Bee viruses aren’t an exception. Obviously, it would be great to have a treatment against it. This infection spreads rapidly between colonies and apiaries – by the bees that carry the virus but don’t show the symptoms. Varroa mites transmit it to the pupae – which is responsible for the crippled wings of the young bees.

Varroa mites also act as an amplifier for DWV. This is the reason that DWV infections pass over to other insects, too. Infected foragers collect on flowers and leave some virus particles. These then infect other flower-visiting insects. This means also an ecological impact – other species often are solitary. Not all insects are good hosts for DWV, they might also “dilute” the risk. However, the ecological impacts are definitely understudied, despite some alarming signs from different studies. A treatment, therefore, would be a good thing. Both to reduce the impact on honey bee colonies and the ecological damage caused by spill-over.

There have been some studies with plant extracts to treat DWV, but none had an echo like a recent publication from a Taiwanese group. They tested the effect sodium butyrate had on DWV infections. Their claim was to reduce the impact of DWV in honey bee colonies. Not enough with that, they also see the potential to reduce the incidence of the virus. Just by mixing it into sugar syrup and feeding it to the bees. This made me think of the oral vaccine against polio I got as a child. And actually, some reactions I saw used the term “vaccination”. Great promises. But let’s start from the beginning.

In previous studies, the researchers had shown that sodium butyrate increased the expression of some genes involved in the immune response to virus infections, detoxication, and memory. However, these studies only showed the impact on a molecular level. Therefore, first experiments on living bees were necessary. For this, they observed four different groups of bees in cages:

After two days, 50% of the bees in group 1 were already dead. After five days even 90%. In group 4, 75% survived the test period. Interestingly, both groups feeding on sodium butyrate (groups 2 and 3) survived to almost 100%. Independently of the DWV infection. It seems that this substance helps the survival of caged bees. Which is an important finding, by the way. It may help with laboratory studies also in other areas that sometimes are limited by the short survival of workers in cages. But that’s another story. The scientists also found the same enhancement of gene expression that they had seen in the previous studies. These results were promising enough to do field tests.

The proof of the pudding – field tests

These for me were the most interesting ones. After all, DWV and other bee viruses impact the whole colony and under field conditions. In a first test, three bee colonies were observed. One got sodium butyrate over seven days and was then infected with DWV. Another one was infected without this substance. The third colony was again a negative control (no DWV and no sodium butyrate). The researchers observed the flight activity of these three colonies by means of an artificial intelligence device. They then calculated the in-and-out-flying ratio and the proportion of bees that didn’t get back from their foraging flight. Again the infected group without feeding on sodium butyrate was the most affected.

Only about 30% of the foragers came back (interestingly, in some press communications I read 50%, but in the paper they say that 70% didn’t return). In the other two colonies, about 83% of the foragers returned from their flights. In a second field test, they exposed the test colony to a longer time with sodium butyrate, which confirmed more or less the results of the first test. From these results, the scientists concluded that the foragers with DWV lost their homing abilities. In addition they state that sodium butyrate reverses this memory loss and therefore the effects of the DWV infection. Well… I’m not convinced.

As a small disclaimer, I’m a field person. The results from the lab studies look perfectly fine for me, the methods are described in all detail. If they’re correct needs the judgement of somebody else, though. For the field part of this paper, however, I dare to give an opinion. I know the clinical signs of bee viruses and other diseases.

I already had my doubts reading the first sentence of the abstract:

“Impairment in the learning/memory behavior of bees is responsible for the massive disappearance of bee populations and its consequent agricultural economic losses.”

Huge, massive misunderstanding. Impaired homing behaviour (not finding home after a foraging flight) is a so-called “sublethal effect” after exposure to pesticides. With possible long-term effects on the survival of the colonies. But this is definitely not “responsible for the massive disappearance” of honey bee colonies. No one involved in It’s just a small part of the puzzle. In addition, the methods to determine problems with homing behaviour are… let’s say: a little bit more complex than measuring the flight activity. These findings don’t say anything about impaired homing behaviour. They only show that foragers from colonies infected with DWV don’t return as often.

I was a bit surprised that the authors didn’t consider the high mortality by DWV as a cause for the high loss of foragers. After showing it impressively in their lab studies. Instead they chose the memory loss and the correlated gene expression which clearly is their interest. There’s nothing bad about that. We all fall in this kind of bias sometimes. However, one should know the own limitations. Like I said that I can’t judge the lab methods of this paper. To be fair, the authors themselves say that their findings need further research. But only after drawing conclusions that don’t have any foundation in the data.

Bee viruses and diseases are complex

Bee viruses like DWV are still understudied, though in the past years there have been plenty of papers dealing with it. The role of this particular pathogen is better understood than the impact of other viral infections in honey bees for sure. But no serious researcher on the topic would say that they’re the only cause for colony losses. Or the supposed memory loss and impaired homing behaviour. Which, again, is only a small element in the complex issue of honey bee colony losses.

In this case, we also have a vector which is involved in this story: the varroa mite. The virus itself was present in managed bee colonies before the mite. Clinical symptoms, however, showed only after the appearance of the vector. Vector-borne diseases are especially complex. I recommend the excellent book “Spillover” by David Quammen to know more about this. Though this book is not about bees, it definitely makes clear how important the ecology of a disease is.

Sorry for this rant. You know, I don’t like simplifications. And at least the field part of this paper is a huge one. In addition, as the authors do promote their findings as if this substance were a solution for colony losses, it’s also dangerous. There would be many, many steps to go before this could be considered even as a possibility. Only in the media it’s already presented as a solution. Again, I wouldn’t mind if the authors talked about their lab findings and proposed them as a candidate for further testing. I give them the advantage of not knowing. So, definitely collaborate with field scientists who know how to do this type of studies. Though I know that unrequired advice usually isn’t well-received.

If you’re reading this as a beekeeper: I strongly recommend not to try out this substance. The data are totally insufficient to show what risks could come from this substance for bees. At the colony level this is a completely different story than in the lab. Even if the colonies tolerate it well, it may be harmful for your honey harvest. A small anecdote to illustrate that: honey quality controls in Germany are showing higher residues of table salt in honey. Which is sodium chloride. The background is the findings on lithium chloride being efficient against varroa mites. But it’s not registered as a varroa treatment.

Beekeepers now say, ok, the chloride part is the same, let’s try this. And they spoil their most important product. Sodium butyrate could be even worse. It’s soluble in water and has a strong smell. Not a pleasant one. If it accumulates in the honey – and its properties induce this risk – it will change the sensorial quality of your honey. And I doubt your customers will be happy about that.

So, to come back to the initial question in the title: no, there’s no treatment in sight for DWV. Sorry for that, too.

If you want advice on how to do field studies properly and how to develop a treatment against bee diseases, feel free to contact me with the form below. I will definitely tell you if your question exceeds my level of expertise. In a first 30-minute call, we can evaluate your plans and questions. If it fits, I’m happy to be your consultant for the development of bee health products. If not, no bad feelings.

About bee nutrition and parasites – diversity for healthy bees